Getting our boots on!

Arriving in Wellington after a disastrous crossing, I couldn't be more pleased to be on stable ground. After kissing the earth hello and making it promise me that it would never leave me again, we dumped our bags in the YHA and took advantage of the horrendous weather by declaring a museum day.

Te Papa museum is easily one is the best museums in the world. The Mountains to Sea zone greets you with a full blue whale skeleton leading into a room stuffed full (get it?) of enough taxidermy to fill a zoo with native New Zealand animals; there's even a 4.2m, 495kg giant squid preserved in glycol. Very modern and interactive, the Natural History Museum could certainly take a few lessons off this place! 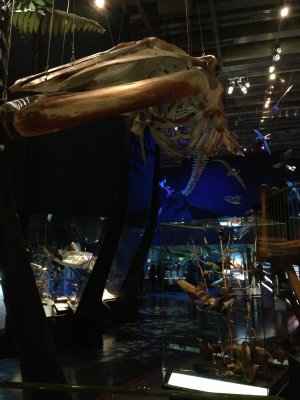 The Awesome Forces section took us through an earthquake simulator and Maori explanations of the gods that cause the earthquakes, volcanos and weather that have formed New Zealand landscapes.

The top floor of the museum is dedicated to New Zealand life as it stands today, its Maori history in Mana Whenua, immigration and colonisation by the British and the Waitangi Treaty, that gave the Maori people the same rights as British Citizens.

There is also a great section explaining Maori culture with a full scale Marae, or Maori community house, donated from Gisborne. These Marae's are intricately decorated with the Maori gods; the floor represents Papa, the earth mother and Rangi, the sky father is represented in the roof. Tāne their son forced his parents apart pushing Rangi high into the sky, providing a space for the Maori people to live in. Tāne's legs can be seen in the entrance of the Marae as it forms the door frame. The other children of Rangi and Papa are carved out of the dark wood on the face of the Marae each representing a different element be it wind, fire or water. 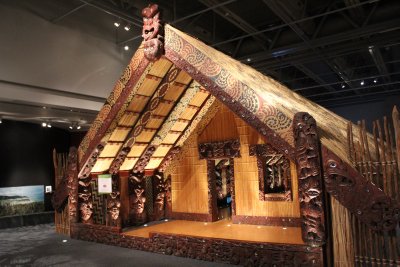 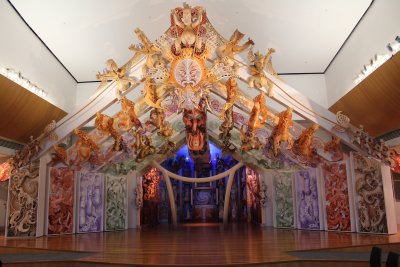 Feeling suitably cultured we decided to round the day off with a trip to the cinema. This too was not without its excitement. We bought our snacks, put on our 3D glasses, snuggled down into the seats and waited for the trailers to start. The first trailer was particularly good with the firm alarm going off and people running out of the theatre. Iron Man 3 was clearly pulling out all the stops for realism.

Panic stuck as people grabbed their popcorn, abandoned children and ran for the door. Going through the food court a man had decided to see off his meal before leaving the building as he frantically grabbed the food off his plate with his hands and stuffed it into his face...... Then moved onto the next table and starting eating the food someone else had left behind on another table! There's an opportunist at every moment!

Waiting in the cold outside, Natalie declined the offer of happy hour at Mermaids 'dancing bar' and waited for the firemen to arrive. The building was given the all clear and we packed back in past diners wondering where their dinner had gone.

On the bright side, Iron Man 3 was amazing.

Tuesday brought better weather and we set out to explore the nations capital. Heading quite literally up the side of the mountain we realised that since we got the car hire we'd barely walked more than 100m, let along up a 70 degree hill! Still the view from the top made it well worth it as you could see both sides of the hill, north into the City and south to the airport and the Cook Strait. 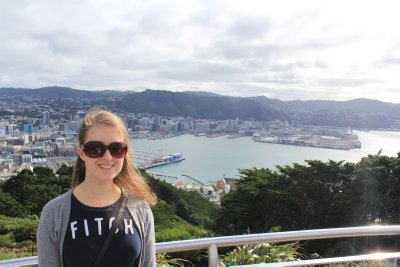 Wellington sits in a hook of land at the bottom of North Island. It's position means it is not only the political hub, but the wind capital of New Zealand with 173 days a year having wind speeds of over 60km/h. Hold onto your hat!

Walking round Wellington, I did feel happy to be there. Maybe it was the familiarity from when I worked in the area 8 years ago but I also think it was just happy to be in a big city again. New Zealand is a great country but coming from London, which has a population almost twice that of New Zealand (8.1m vs at 4.5m), it can feel a bit sparse in places. Plus they have a giant fern ball to spin on your finger and a super fun happy slide! 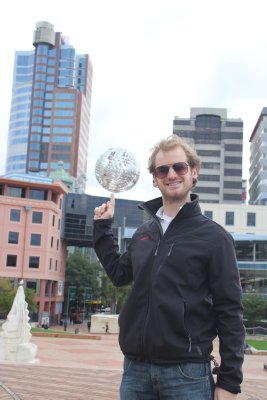 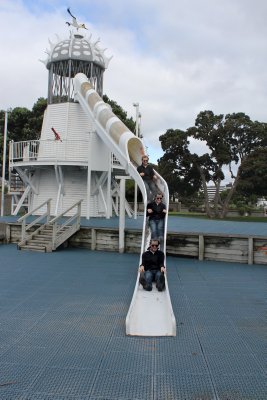 Wellington also has a fair share of history to it and Old St. Paul's is a prime example of that. Built in 1866 entirely out of native timber, St Paul's was the parish Cathedral for Wellington and the British Governor at a time when New Zealand had just joined the commonwealth and Wellington was renamed the Capital of New Zealand from Auckland as it was seen that the seat of government should be closer to the Cook Strait so that South Island could be more effectively governed.

Its significance to the community changed significantly during the Second World War. With British troops engaged with battles in the pacific and on the European continent, and New Zealand troops in the Middle East, President Roosevelt agreed to send a battalion of troops to protect New Zealand. The country also held strategic importance to the Americans following the bombing of Pearl Harbour and the growing fights in the Pacific.

The American troops brought with them music, alcohol and a sense of living for the moment, transforming the social life of Wellington. Not that this was always appreciated with New Zealanders coining the phrase 'overpaid, over sexed and over here'. In fact, following the war, New Zealand found itself short of women as so many emigrated to the States as war brides. 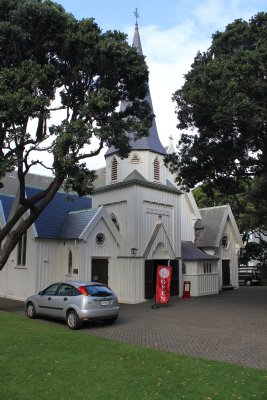 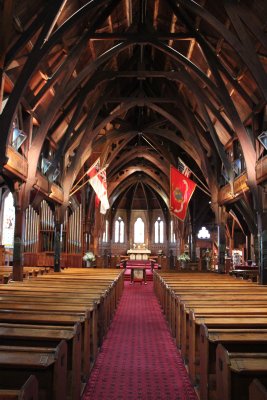 Sitting in on Parliament

Just round from Old St. Paul's sits New Zealand Parliament and the Beehive. New Zealand is quite unique in only having one chamber of Parliament after the Legislative Council passed a motion to dissolve itself due to inactivity. Imagine the House of Lords passing a vote to say they never did anything so stop paying them! Very modest! 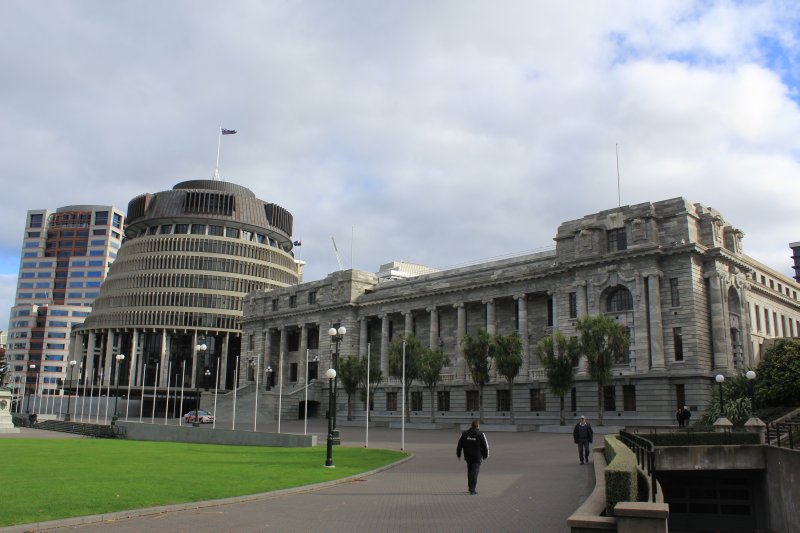 Top Tip: You can get a free one hour tour round the Parliamentary buildings and learn about the process of government.

Although it did provide quite a unique view of government, we did find the tour a little too focussed on the buildings rather than the current governmental process. Fortunately you can also sit in the Public Gallery and watch Parliament in session when it is sitting. Unfortunately you can't take your camera in but I can assure you it looks something like this:

Parekura Horomia, the former Minister for Maori Affairs and MP for the Labour Party had recently died and Parliament had been suspended for the day to pay homage to a politician who was clearly very admired within New Zealand and the House of Representatives. It was very moving to sit in the Gallery, which was packed with Maori friends, family and supporters of Parekura and hear other politicians speak so dearly of a colleague. Hekia Parata spoke passionately in both Maori and English and Louisa Wall (who recently sponsored the same-sex marriage bill through New Zealand Parliament) even sang a beautiful traditional Maori song, both of which served as reminders of how the Maori community is deeply integrated within New Zealand Culture and Politics.

As another example of how different New Zealand is to the UK, check out the house and gallery breaking into song after the passing of the same-sex marriage act!

Whilst in New Zealand, we asked a few friends what is traditional New Zealand food. The suggestions that came back where; lamb, 'fush and chups' and a stone grill. Stones are heated for 8 hours in the oven to 400 °C. The stones are then brought to your table with your choice of beef, lamb or prawns and you cook the food to your tasting!

A very novel idea, I had to try it! I opted for a filet of beef (has to be done properly) and Natalie had the surf and turf. It's a lot of fun cooking your own food, but for me it was lacking a little something, maybe seasoning and a pro chef. Still a definite must whilst in NZ. 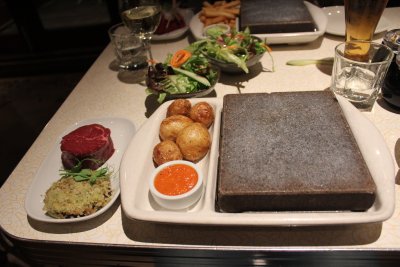 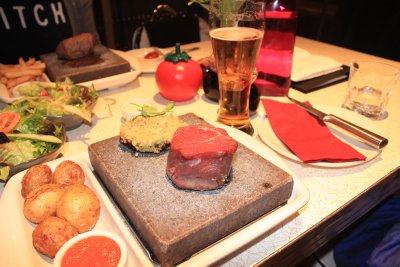 On the way out of Wellington we stopped off in Silverstream to see the school I worked at back in 2008 then headed across to Paraparaumu. Couldn't help but stop in Whitby to take a photo or two!