The Who, The Why, The Where and the How 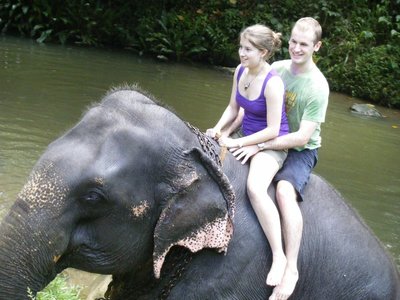 That's Me! There I am right there on that elephant (not the one in the purple top). Never happier than when I'm in a new city with a map in my hand ready to go exploring. A keen cook and amateur photographer, I am going to sorely miss my kitchen but love swinging my camera round the world's wonders.

Chartered Accountant by trade but told in my first ever week of work I was "inappropriate in a corporate environment", a mantra I have lived by ever since. Have just left a job working for a large bank and will be considering my new career on my way round the world. Ideas currently stretching from ice cream tester for Carte D'or (I hear they have an amazing dental plan), to being head chef of my own restaurant that only opens at times I feel like working.

Most looking forward to: meeting up with friends and family around the world and returning to Malawi where I volunteered with Ripple Africa back in 2011.

As a very keen but very amateur photographer, many hours will be spent making Natalie a 'camera widow' as I take 70 photos of a grain of sand!

Also to tasting everything the world has to offer; from puffin to guinea pig, if someone else is happy to eat it, I'll give it a try!

Least looking forward to: when I inevitably give myself food poisoning from eating guinea pig. 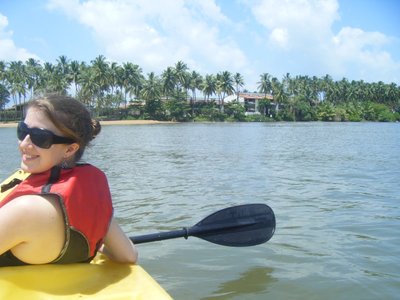 There she is right there on that elephant (she is the one in the purple top). Natalie and I met back in September 2005 on the first day of University and seven years later is now my wife and travel buddy! We've been on some big trips together from Ireland to India, Morocco to Malaysia; Natalie is sensible head of our travelling exploits. More likely to be seen sipping a cocktail at the bar than throwing herself off a bridge or diving with sharks.

Also a Chartered Accountant and auditor by trade (everyone wants this couple at their dinner parties!), Natalie is taking a break from counting paperclips to travel the world and find her 'inner penguin'.

Most looking forward to: travelling Australia and the skydive she once promised she'd do in New Zealand, though is starting to rethink this one!

Least looking forward to: when Will inevitably gives himself food poisoning, she did tell him it 'looked a bit dodgy'.

How to describe Steve? Steve came about in a study at school back in 2002. I'd bought Steve (short for St. Vincent, our boarding house) from Ikea to 'spruce up the study'. What started as a funny idea; to take Steve where ever we went and get a photo of him, got wildly out of hand. 82 cities in 23 countries later, the joke has gone full circle and become funny again.....Well I think so anyway!

Steve has seen it all, The Taj Mahal, Scuba diving in the Red Sea, The Petronas Towers, The Eiffel Tower, the top of Mount Snowdon, the Blue Mosque of Istanbul..... If you name it he's either been there or is on his way. He's even been to Norwich!

I remember when I first talked to Natalie, not first met, but really talked to her. I had gone round to her halls in first year of University to discuss/plagiarise her Principles of Economics essay. Natalie was (and still is) a studious little lady and I was..... well slightly less studious to say the least. Very quickly I had exhausted my knowledge of the laws of supply and demand and we went into the standard University introductions; who you are, what life was like before University life, where you'd been to, did you do a 'gap yah' etc. etc.

Natalie sat there listening to me endlessly natter on (some things never change) about where I'd been on my 'gap yeah'; ski season, working in and touring New Zealand and finally Australia, the place she'd always wanted to go. It was the same for me; I'd always wanted to go to Australia and had worked and saved 3 summers and the first 6 months of my gap year to get myself there. We made a loose promise that one day we'd go together "maybe a post uni gap year". Little did we know what life had in store for us!

Two degrees, two flats, two professional qualifications, 3 jobs and a WEDDING later and we were still making the promise to go travelling 'one day'

So five years young into ours careers and we're jacking it all in to grab the bull by the horns and go travelling. A journey that'll take us from yuppies to hippies, from 5 star to $5 a night hostels, because if you don't do it now, when will you? 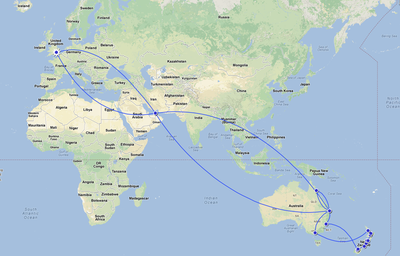 The original trip that started it all! Meant to be a two week holiday to see The Mothership/Management/Mumsy/Mrs Adams Snr and The Dad. The back flight of the holiday was kicked back by a whopping two months.

Starting at Mum and Dads current worldly residence in Brisbane, we'll quickly be jetting off to Sydney, the Blue Mountains, Bondi Beach and a night in the Opera house before skipping over to family friends in Wanaka, New Zealand.

From there it's the Milford Sound, one of the glaciers, then up the east coast of south island to Christchurch and stopping in Kaikoura for a quick spot of dolphin swimming/whale watching. Ferry over to Wellington and up to the smelly sulphurs of Rotorua and Lake Taupo before ending in Auckland.

Zipping over to Melbourne to catch up with a uni friend and her 12 Apostles on The Great Ocean Road, and onto the Great Barrier Reef in Cairns. Topping it all off with the British Lions Vs Queensland Reds rugby match before coming home to Blighty! 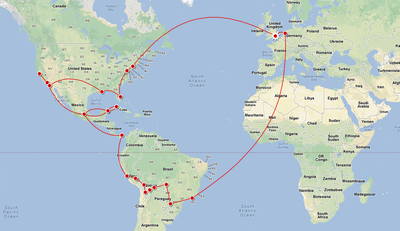 After a short pit stop back in the UK to mainly get our washing done, we'll be back up in the air headed to South America, a first for both of us.

Starting off in Rio De Janeiro and heading inland to the incredible Iguazu falls, then either through the Amazon or Argentina to take us to Bolivia and the Uyuni Salt Flats. A hike up the Inca Trail to Machu Picchu (Dad joining for this one!) before descending into Lima for my 27th birthday.

Up to Mexico and across to Cuba for cigars and caipirinhas. Returning to Mexico for the wonders of Chichen Itza and the Cancun coast before the street food of Mexico City and the sights of Teotihuacan.

Back to the western world as we'll land in Los Angeles to meet Natalie's parents, and to cruise the west coast from San Francisco to San Diego. Accross to Florida via the jazzy soul of New Orleans to see my brother and his beautiful family for a week. Up to Washington to meet Big Barry O'B in his shiny white house, and up to New York to end our Americano leg with a slice of Big Apple pie! 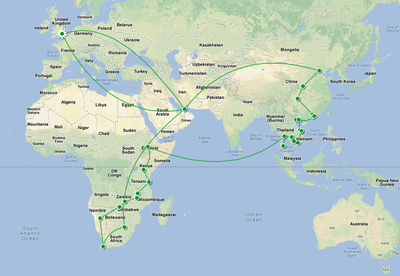 The final and largest chapter to kill off any travel bug! A brief 2 day stop in Dubai before we touch down in Beijing to see the Great Wall, the Forbidden City and maybe a panda. Inter railing down to Xi'an to meet some Terracotta Warriors before continuing to Chongqing to see the mystical Three Gorges. Down to Guangzhao and Maccao before heading to Hong Kong by boat.

A flight to Hanoi will ignite our 3 week Vietnamese adventure via Halong Bay, Hue, Hoi Ann and ending in Ho Chi Minh. Over into Cambodia and Phnom Penh before heading up to Siem Reap and the Temples of Angkor Wat. A relaxing week or two in Thailand will see in Natalie's birthday with a full moon party before we fly to the last of 6 continents.....AFRICA.

Into Nairobi and down to Dar Es Salaam and the spice island of Zanzibar. Over-landing down to Lake Malawi to stay with the charity I volunteered with at the end of 2011. Into Zambia for a safari and to see the 'smoke that thunders', Victoria Falls. Through Botswana and Namibia to find that not all meerkats actually speak Russian before ending our trip and seeing in the new year in Cape Town.