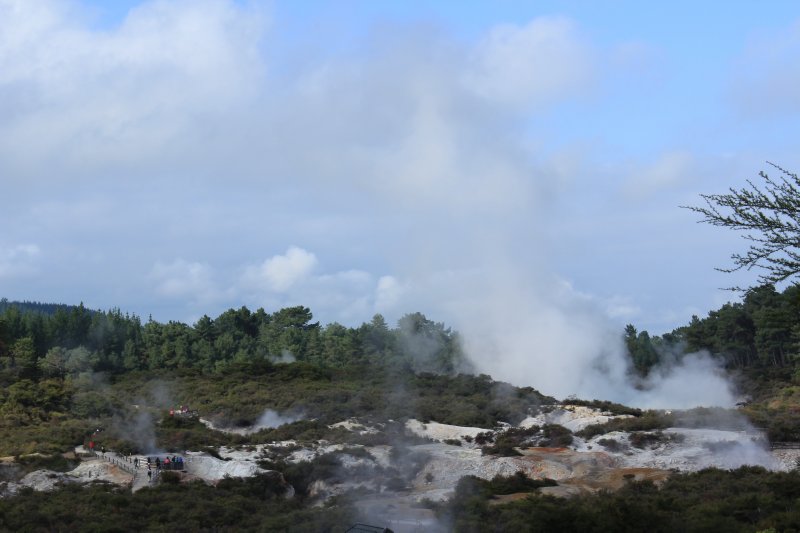 Driving north through north island there is a noticeable difference in the landscape we had become accustomed to in south island. The dramatic mountains had been replaced with plush, green rolling hills reminiscent of sights more familiar with the English countryside. It's no wonder Captain Cook, a man from the north east of England found himself so at home here.

As you approach Taupo, you are met by the monstrous Mount Ruapehu, one of three volcanoes making up the Tongariro National Park and home to New Zealand largest ski area. Thereafter the horizon is polka dot with white plumes of smoke rising from the naturally occurring hot pools, geysers and thermal springs that make the area famous. Meeting the south of the lake, Taupo sits a further 45km round the shoreline to the north. This is no small lake by any measure, in fact it is larger than Singapore.

Although the area is a geographical wonder and in many ways spectacular, there is always two sides to every coin, the tail end of this coin being that the thermal area goes hand in hand with the release of sulphur into the air. Think egg curry, and you'll get a whiff of what I mean!! 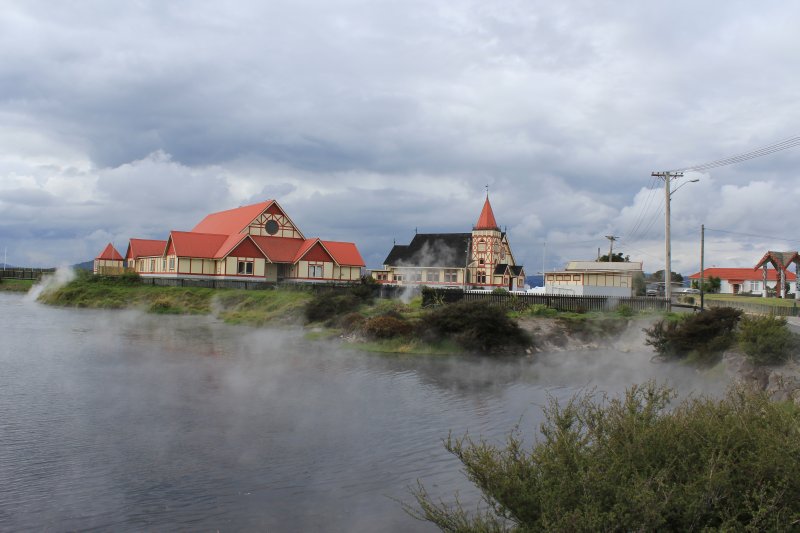 Further round in Rotorua you can see the effect of the thermal land throughout the town. It is not uncommon to see steam squeezing through cracks in the pavement, or a paving tile rumbling as the hot water bubbles beneath it. Quite a few buildings have steam pipes round the side, funnelling in free heating to the house. It's no surprise that 70% of New Zealand's energy supply comes from renewable sources such as geothermal or hydropower from draining the lakes. We even got to see the Aratiatia dam being opened near Taupo, watching the canyon flood in a matter of minutes. Its great fun and completely free to go watch so well worth checking out the opening times if you're in the area. 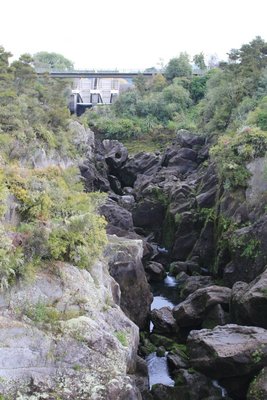 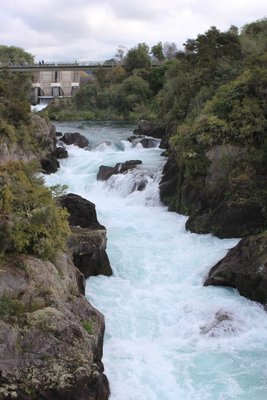 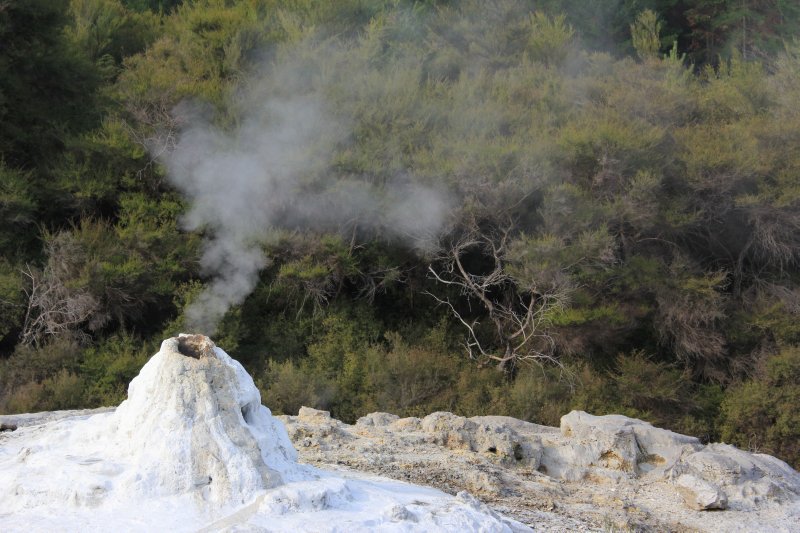 In 1901, Rotorua housed one of the largest open prisons in New Zealand; 35km south of Rotorua, and surrounded by complete bush land, the nearest town was well over a days travel away, assuming the prisoner could make a break through the thick shrubbery. What remains today is the worlds largest man made forrest (pine is not actually native to the country despite being its third largest export).

The hot pools were discovered by prisoners, clearing earth and planting pine in the area. Desperate for a bit of refreshment to their hard labour, they stripped off, chucked their clothes in the hot pool to clean them out. The impact of the clothes broke the surface tension of the geyser and sent their laundry 20m into the air and the convicts running. Over the years the silica from the eruptions has formed a white funnel that intensifies the eruptions for anything up to an hour.

Lady Knox Geyser is now the star attraction of the Wai-o-Tapu Thermal Wonderland erupting at 10.15 every morning. Having seen Stokkur Geyser in Iceland, we were quite excited to see Mother Nature back in action.

The excitement of Stokkur geyser was watching the water bulge and swell with the rising heat before it exploded into the air. The anticipation of the eruption was almost better than the eruption itself, but when it did go it felt like a real explosion of force and power as if the earth was releasing a huge amount of energy into the sky, the water flying 30-40m into the air.

Unfortunately the mystery and majesty of a geyser eruption is somewhat lost at Lady Knox as the tour guide drops a bag of soap into the top of the geyser and waits for it to erupt. A small fountain starts and gradually builds into a taller stream of water, it is more fire hydrant hit in the street than force of nature. Although it is good, I think if we were to return to the area, we'd visit another park as if you go to see a natural wonder, it needs to be all natural not aided along by hand. On the bright side, on a sunny day it does give off a nice rainbow: 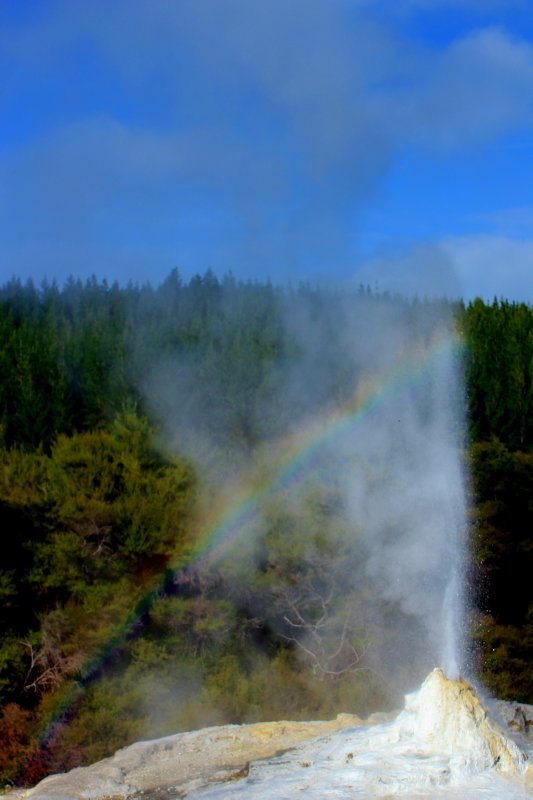 Wandering around the 'Thermal Wonderland' I was certainly left wondering what all the wonder was about. There is a series of steaming grey pools, all with different levels of egg whiff. To be fair to the area, I was told that there had been a drought recently and this had an effect on the colours that normally show up in the pools. Certainly looking elsewhere online, the attraction is far more colourful than the grey mud flats we experienced, and at NZD $30 a head, we couldn't help but be disappointed. The words 'Thermal Wonderland' do drum up images of exciting thermal activity, vivid colours and well at least something to wonder at!! Steaming water that smells of bad eggs, that gets right to the back of your throat, doesn't quite cut it.

The highlight of the thermal wonderland is the champagne pools, and it was the only stop out of 23 that evoked any interest for me. The pool is created by an explosion 700 years, leaving a crater 62m deep. Water flows in through a deep water conduit at 230C cooling to 74C at the surface. Carbon dioxide bubbles rise to the surface giving a bubbling effect much like......you guessed it, champagne. 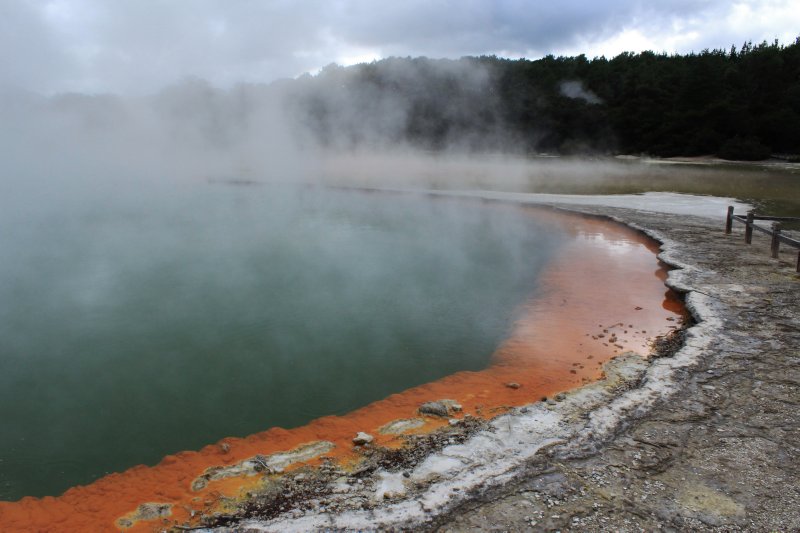 Deposits of arsenic, sulphur compounds, gold and silver settle round the edge of the alkaline pool creating a bright orange rim to the pool.

Far more exciting than the thermal wonderland and completely FREE to visit are the mud pools just around the corner. Here you can see the heat rising from the ground as it spits mud high into the air. There is something quite hypnotic about watching the pools of mud bubble away. See what you think! 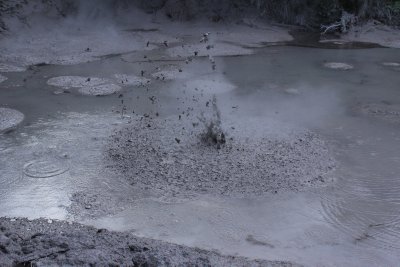 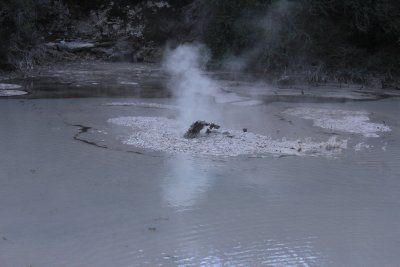 The Huka falls are the largest falls on the Waikato River (the longest river in New Zealand at 425km), draining the waters of Lake Taupo. Although not the largest falls we have seen in our travels at only 11m, they are probably one of the most intense. The Waikato river is normally 100m and the gorge proceeding the falls force the same mass of water through a 20m wide gorge channelling a whopping 220,000 litres per second, enough to empty 5 Olympic swimming pools in a minute!

As the water from Lake Taupo is largely formed from meltwater from the surrounding mountains, the falls produce a blue and white foam or 'Huka', the Moari word that give the falls its name.

Hungry for lunch we headed to Huka Falls Prawn Park. Declining the option to catch our own prawns, we found a table and ordered half a kilo of prawns in garlic butter and they were HUGE!!! Not that our luncheon was completely frivolous, here are the top prawn facts we learnt:

Now that is a hard core prawn! 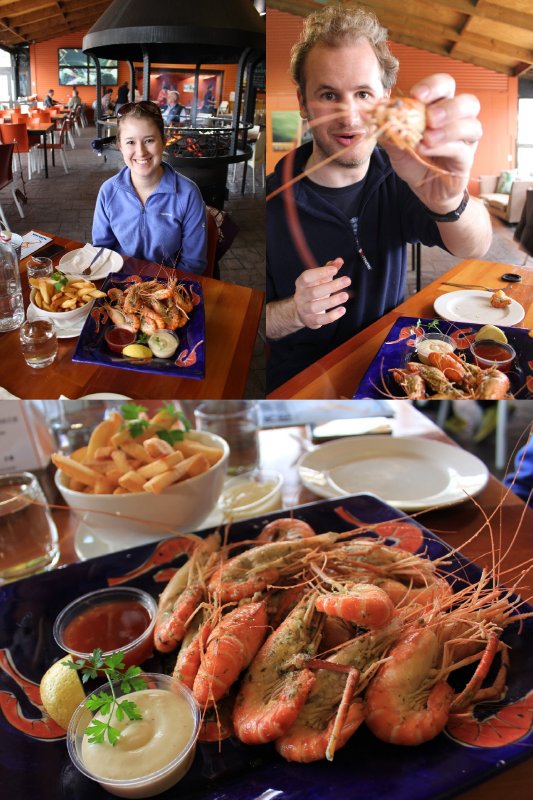 The unfortunate thing about the Rotorua and Taupo region is that it's fame has got the best of it and the tourist industry has fenced off the majority of the areas natural wonders and slapped an unnaturally high entrance price to see them. So we were particularly pleased when we were passed on a top tip from Ant at home to visit Kerosene creek, a naturally occurring hot stream south of Rotorua.

Parking up the car a couple of clicks down a chunky gravelled road (almost finished Lucy the car off for good), we pulled up, grabbed our 'togs' (Australasian for swim suits), and followed our noses down the creek to a small waterfall and pool in which to take an afternoon bath. Unfortunately there were already some other bathers around as I hear a skinny dip in the hot pool is quite liberating!!!

The stream is probably just a bit warmer than a luke warm bath and as you dig your feet into the sand beneath you can feel the earth getting hotter and hotter. You only need to bury your feet about 10cm or so before its actually a little too hot to touch. The novelty of bathing in a naturally hot stream that isn't serviced by a tourist attraction is really great. Well done Mother Nature and thanks for the tip Ant!! 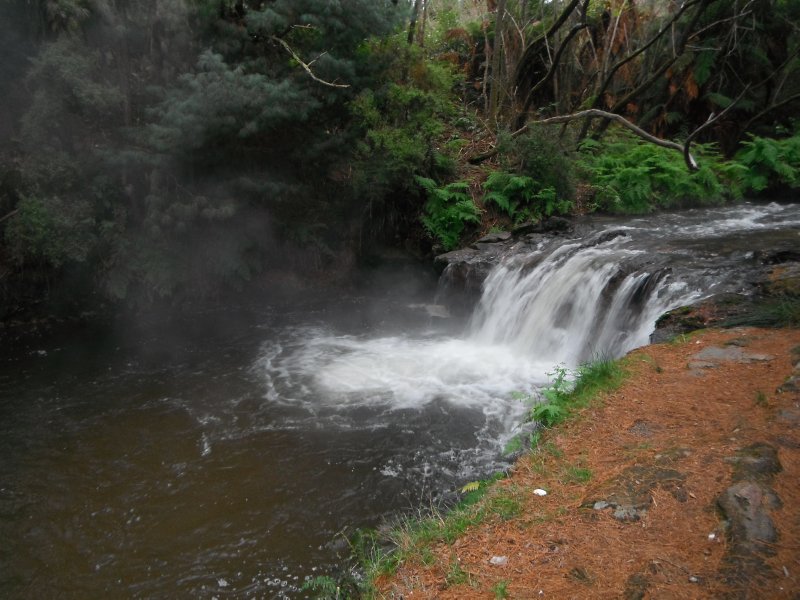 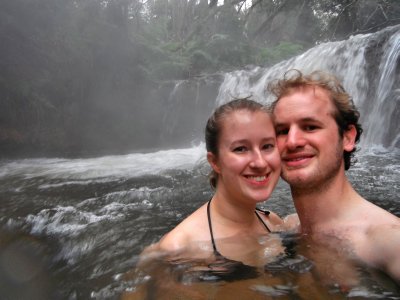 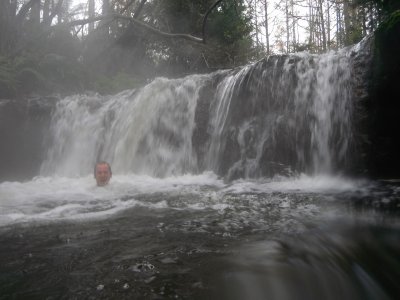