A City, Native Wildlife, The Great Ocean Road and Wine - by Willy Wifey 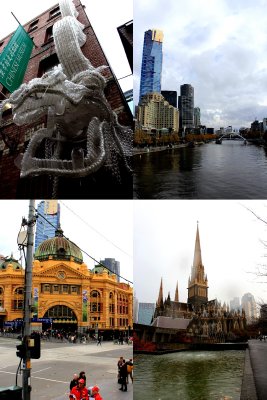 So after another early start it was off to Auckland airport to catch our 6:30 flight to Melbourne. Whilst we were sad to leave New Zealand, the thought of seeing Melbourne, the home of one of the greatest daytime tv shows, Neighbours, was exciting enough!

Picking up our third hire car of the trip at the airport (Toyota Yaris, an improvement on poor Lucy) we set off into town to find our friend Sara. Sara moved to Melbourne in January after a few months of travels, and very kindly agreed to put us up and explore the city with us. Amazing to catch up with Sara after so long! We decided to make the most of the day and go exploring in the city to find some tourist information on what to do.

Melbourne is a great city to visit, we feel it has a bit more character and history to it than some other Aussie cities. There are great colourful buildings, walks along the river which dominates the central business district (CBD), and buildings with a sense of history such as Cook's Cottage in the park. Public transport is also varied, but mainly filled with tram lines wherever you go. Top tip: if driving on a tram road, do not attempt to drive on the tracks as all you will do is scare your passengers as the tires slip on the metal!

After arriving in the CBD, we called in at the Tourist information centre in Federation Square, the main square in the city. We spoke to a lovely woman called Carol who had a badge stating '15 years as a volunteer'. That should have been our warning because when you ask something general like 'So, what is there to do in Melbourne in 3 days?' be prepared (as we were not) to spend at least 20 minutes being told to go to 68 different places, and for your map to start resembling a child's scribble.

A Loo with a View

A cheeky tip for a skyline view of Melbourne

Carol had some great ideas for things to do all over the city. Best of all was for a free view of the city from 35 stories up. This was brilliant: we strolled casually into the Sofitel hotel lobby (wearing our hiking boots and rain jackets, really blending in well with those enjoying their afternoon tea), took a lift to the 35th floor, and went to the bathroom. In both the men's and women's bathrooms, there are floor to ceiling windows showing a great view of the city for free! Save yourself the $35 fee to climb the Eureka Tower (link) for a similar view! 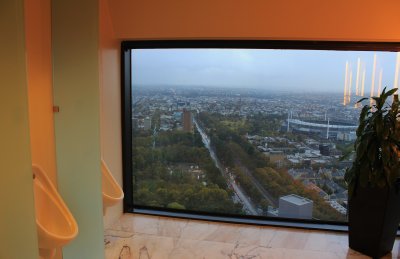 The following day, we decided to tackle the Great Ocean Road, a 600km round trip out to the see the 12 Apostles . Along the way, there are numerous spots to stop at to see local surfers (very brave in winter!), wild koalas who live in the trees behind a caravan park (thanks Carol!) and other points of interest along the way. It started out as a nice day with a hint of blue sky, however rain clouds made themselves at home pretty quickly and within an hour the wipers were going full blast and photo opportunities were getting slimmer! We thought we'd left the rain behind in NZ but it caught up with us! Still, it was a great drive (between downpours) to enjoy the spectacular scenery the Great Ocean Road has to offer: 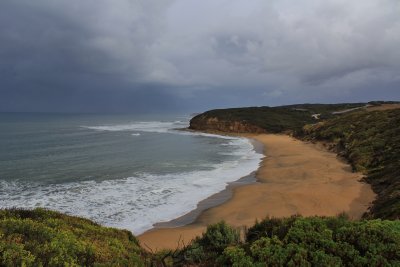 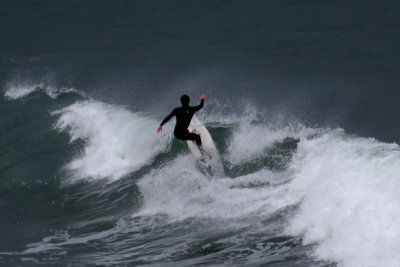 We even found the Lighthouse from Round the Twist in Airey's Inlet. Remember that show? Have you ever, ever felt like this? With strange things happening, are you going round the twist? 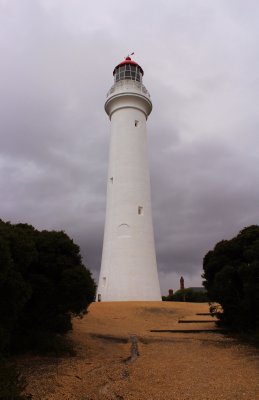 We followed Carol's advice and went looking for the local wildlife. The Anglesea Golf Club along the Great Ocean Road is well known for its resident kangaroo population and we were not disappointed. We parked up in the car park (I moved from the President's spot where I initially parked as Will said we didn't qualify) and just ahead of us on one of the fairways was a kangaroo! We saw a group more of them off in the distance all over the various holes just eating the grass and relaxing, amazing! 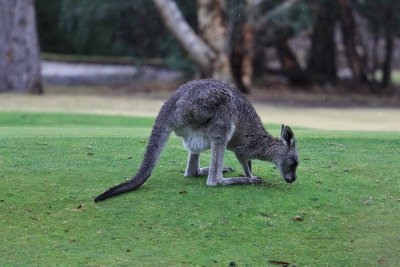 Further along, behind a caravan park in Kennett River, we were told that the trees along the road usually had a few native inhabitants in the form of Koalas, and we were really lucky to see 3 koalas just resting in the trees. Our resident photographer got some great photos of course capturing just how cute and cuddly the koalas look! 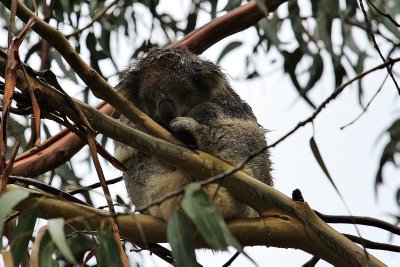 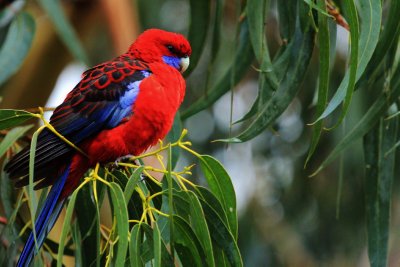 Getting to the Apostles at 5pm, we had our best scenery of the day seeing the cliffs and Apostles at sunset: 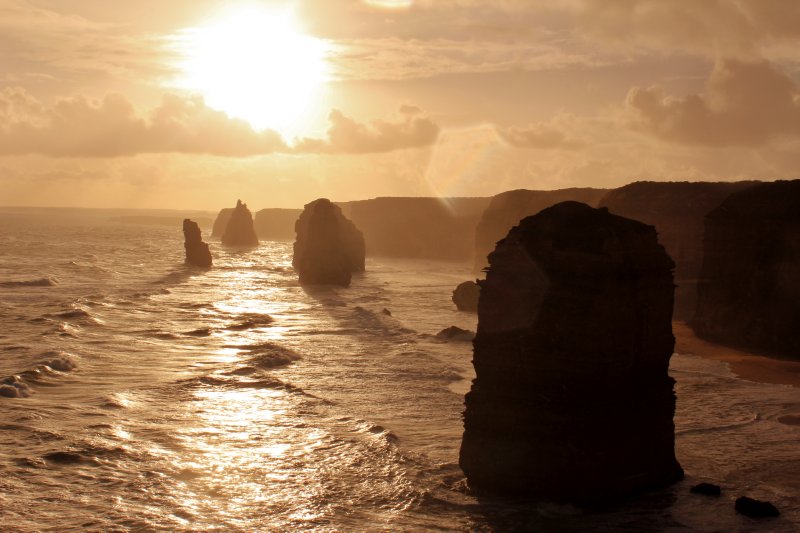 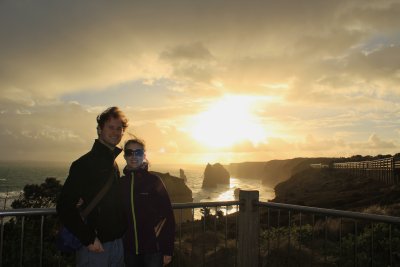 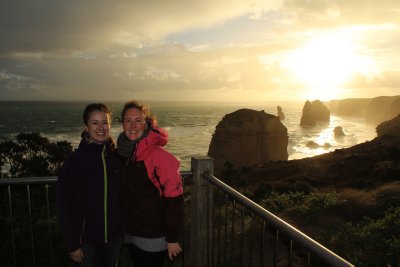 The Apostles were formed thousands of years ago by waves repeatedly wearing away the softer stone in places, leaving the harder stone (the Apostles) in tact and separated from the cliffs. Over the years, some have eventually collapsed into the sea altogether, so currently there are about 10 and a half Apostles remaining. Having taken our photos, we got back in the car, drove the 300km back to Sara's flat, and ordered takeout. Brilliant day!

Visiting the Kennedy's and the Yarra Valley

Final day in Melbourne and the weather being agreeable, we decided to take a tour of the wine country nearby, the Yarra Valley (link). However, not before we went on an adventure to find Ramsey Street... We finally tracked down the real life street (real namePinoak court) and got out to take some photos with the Kennedys!! 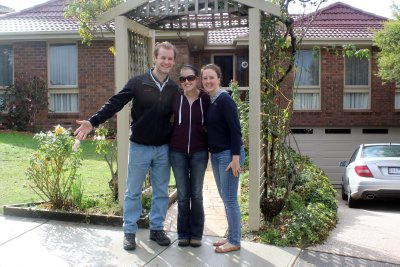 Leaving Ramsey St behind, we decided to reward ourselves with a drink. Similarly to NZ, there are some beautiful vineyards around, big and small, with some great tasting wines. We also stumbled across a vineyard that does cheese tasting along with the wine. Of course, it was always going to be the case that Will chose one with an amusing name, this particular one being a compte by the name of Julius Cheeser! 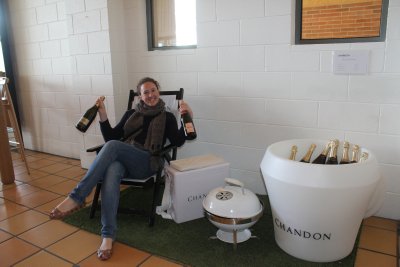 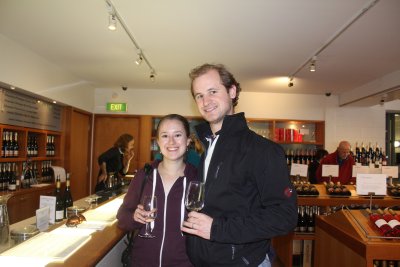 I couldn't say Australian wine beats a Marlborough Sauvignon Blanc that we tried in NZ, but still was a great trip and we came away with some souvenirs from Badgers Brook, a smaller vineyard in the region with picturesque scenery and the best wine from our tour.

Since we had an early flight the following morning to Brisbane, a night out in Melbourne was called for! With another friend Rhiannon also being in Melbourne, we made it a group affair and headed out for some Mexican food and drinks at Radio Mexico. All in all, would highly recommend Melbourne as a great city to visit in Aus, made all the better when you're with friends. Big thanks to Sara for putting us up and great to see you Rhiannon! 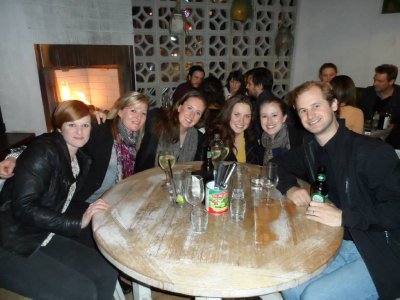