Entries about christ the redeemer

Musical beaches, fancy steps, and dances in the sands

View 1. A Land Down Under & 2. No Speak Americano on Where's Willy's travel map.

In 1990, Chilean-born artist Jorge Selaron decided he was fed up with his front garden and popped down to his local B&Q to spruce it up. Like most men in a hardware shop, he got carried away and what started with a few tiles, ended up in a 250 step mural that now stands as one of Rio's most well known and visited land marks. 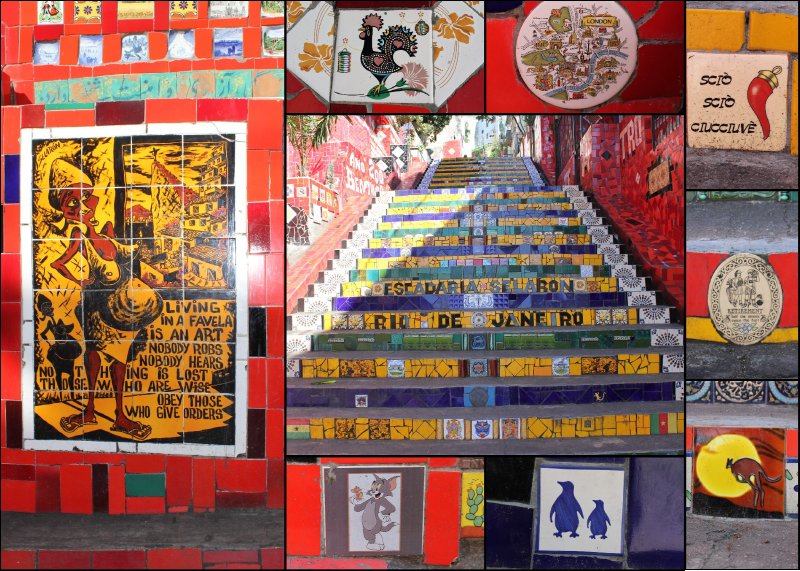 Originally collecting tiles from nearby building sites and painting them by hand, neighbours mocked him as he spent day and night decorating the steps and selling paintings on the side to break even. Over time tiles where donated from all over the world and added to the steps as a piece of art that Jorge himself described as never to be completed, always changing.

There are now over 2000 tiles stretching over the 125m climb up to Santa Theresa. The stairs are a real marvel, though not in the nicest area of the city, they are well guarded by tourist police allowing visitors to take their time wondering the steps admiring the different tiles, trying to find one from their country or just an amusing one. 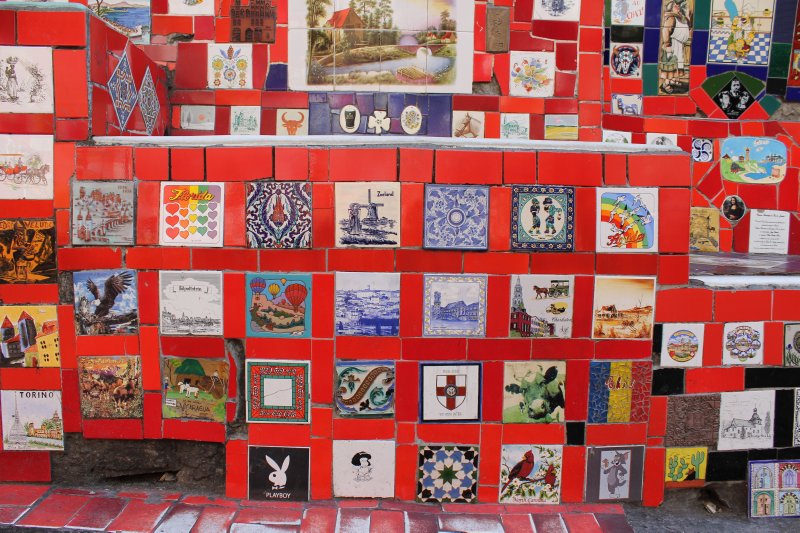 Sadly Jorge was found dead on the steps earlier this year. Burn marks were found on his body and rumours of involvements with local favela gangs and drug lords surround his death. One thing is for sure, the mural left behind serves as a vibrant symbol of Rio, can now be called complete.

It is unknown which of the world's many Copacabana's inspired Barry Manilow's hit song, though given this beach is south of Havana, it is unlikely to be this one. Copacabana and Ipanema sit in the south zone of Rio de Janiero flanked by the iconic mountains that make the beaches so memorable. The beach is awash with beach sports, mainly volleyball and football and music and passion are always the fashion, 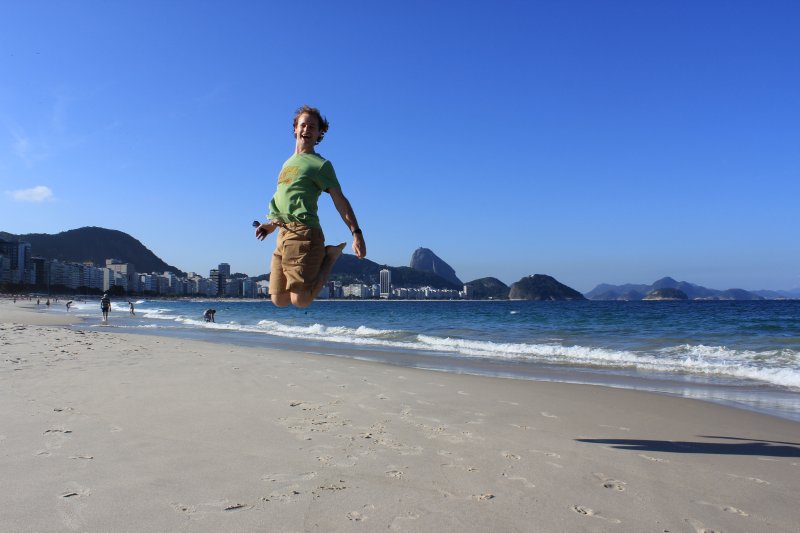 There are also a number of talented sand castle builders, very impressive! 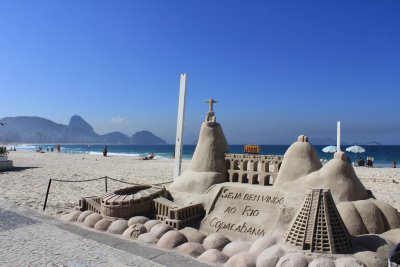 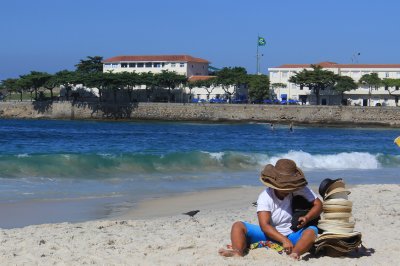 Tall and tan and young and lovely
The girl from Ipanema goes walking
And when she passes, each one she passes
Goes "A-a-a-h" 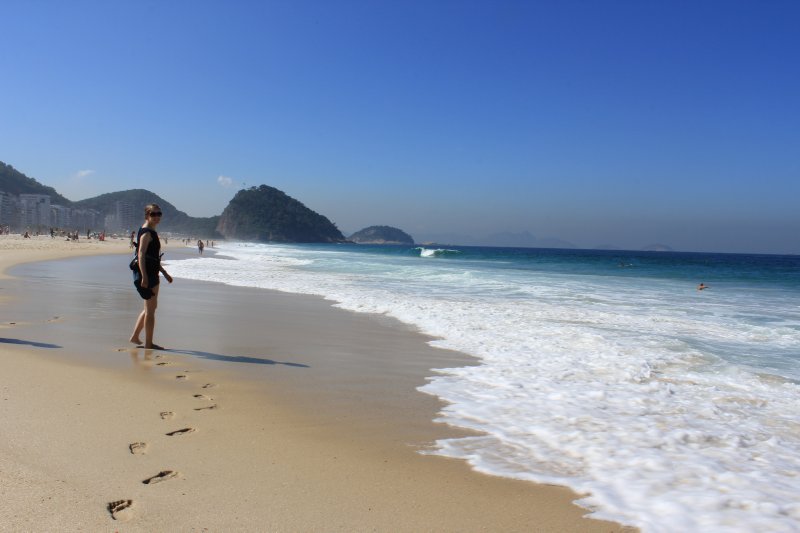 She may have been tall, tanned, young and lovely but it may be more likely that the ‘oohs’ came from the size of bikini she was wearing. Brazilian women are famed for their derrieres and as you browse the beach there is many a bottom eating up a bikini for lunch. Less is more on this beach devoted to sun, sea and the good life.

Ipanema is notably cleaner and more upmarket than Copacabana, probably due to it being slightly less accessible by public transport but it is a beauty. Both beaches are lined with stalls selling caiprainhas, cerveja (beer), coconuts with a straw in and sun loungers, just in case you weren’t already relaxed enough. What else can I say, life’s a beach! 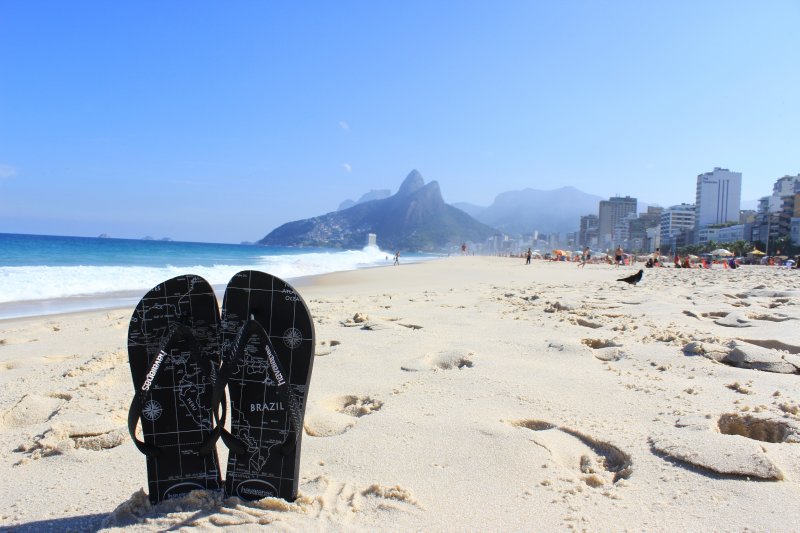 Ever get that feeling that someone is watching you? 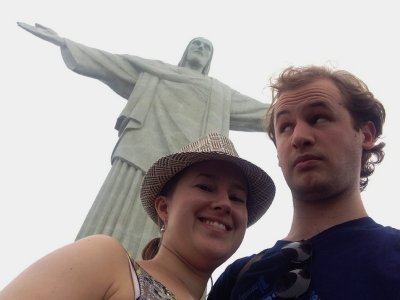 On our second day we decided to go and see Rio’s most well-known landmark, Christ the Redeemer. Having been in Rio for 36 hours we were slightly confused that we hadn’t already spotted him watching over the city. For those of you who have been to New York only to realise the statue of liberty is only a dot on the horizon rather than the towering giant that TV and film make it out to be, Christo Redentor is similar in misconceived size and is a mere prick on a hill top, pun intended. 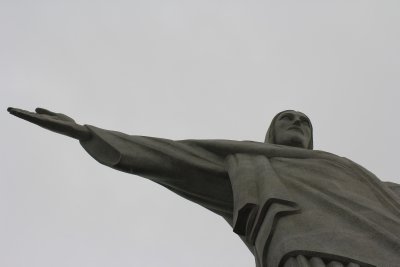 Originally settled by the French, who were kicked out by the Portuguese wanting to prevent French domination, Brazil was named after the highly desirable Brazilwood and the dye used to colour fabrics, paints and inks.

Not much is known of its previous inhabitants whom the Portuguese considered to be stone age people of little value and worth. Importing 3.5m slaves from Africa (40% of all settlers to the new world), to farm the land for wood, sugar and precious materials.

When Napoleon marched on Lisbon in 1807, the prince regent, Dom Joāo fled to Rio de Janiero making it the only New World colony to serve as a seat of the throne to a European Monarch. The prince regent eventually returned to Portugal in 1821 (then King) leaving his son Pedro as regent. Like most unruly sons, a year later Perdro declared himself Emporer of Brazil, Portugal too weak to fight a family feud so far away let him have it. Pedro was later forced to abdicate the throne following a series of scandals leaving his 5 year old son to rule. Emporer Pedro II was to rule for 50 years forging a state that eventually rid of the monarchy itself.

Back to the statue, located in the middle of Tijuca National Park which covers 32km2 of Rio’s land mass, the original design was for Christ to hold the world in one hand and the cross in the other hand some 28m away. The design was later adapted not to include the symbols as Christ himself was the cross and Rio represented the world. Building was finalised in 1931 and the statue has been a symbol of the city and the country ever since. 30m tall Jesus looks over the city and is a constant reminder of its status as the world’s largest Catholic country.

At all these things, there is always one idiot....... I tend to find that idiot is me! 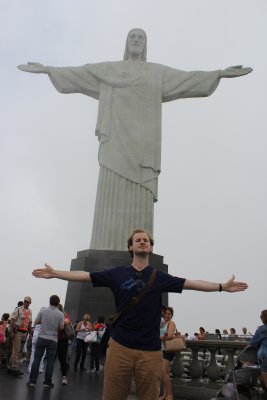 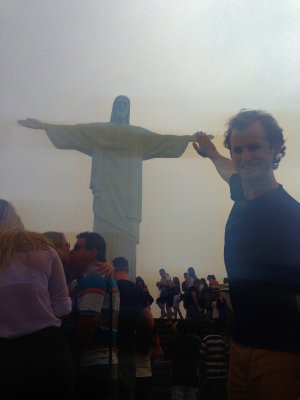 Unfortunately for us, no view of the city due to fog.

Standing at 318m tall, Pāo de Aҫúar, or Sugar Loaf Mountain, is a cable car ride away from 360 degree view of the city and across the Guanabara showcasing a myriad of high topped islands that serve as on obstacle course to incoming flights.

Unfortunately for us, we couldn’t summit the mountain on the first night due to the Brazil Confederations cup match being shown at Morro do Urca (the half way point for the cable car complete with bars, restaurants shops and even a nightclub!).
On the night we did summit we were treated to this breath-taking view of the city: 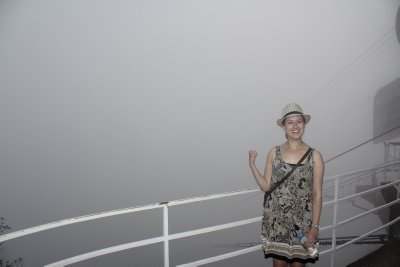 Ok, so it was fogged out too! Luckily we managed to get a few shots and watch the sun go down from Morro Do Urca. A fitting scene for the end of our second day. 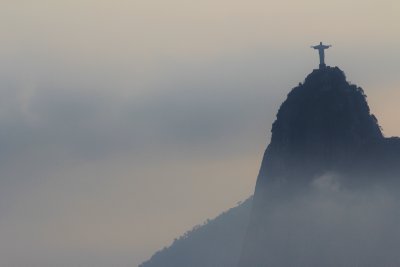 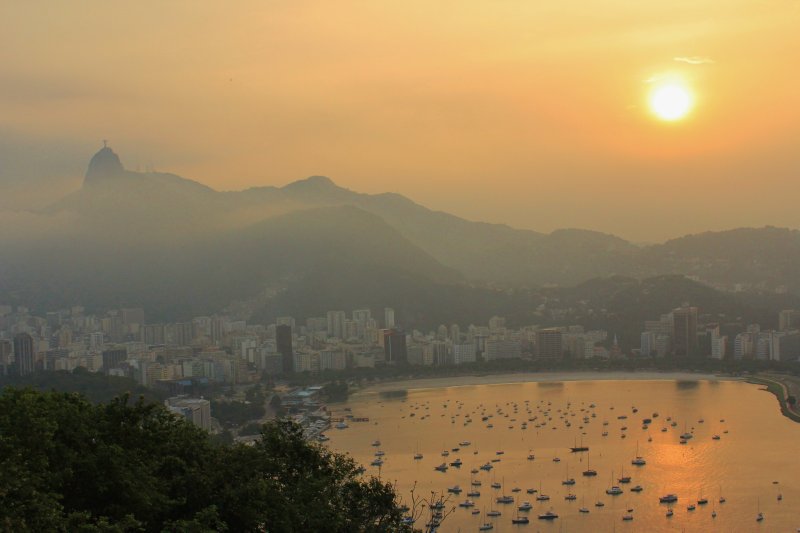 It is a real shame the riots stopped us from seeing Rio's nightlife, a vibrant colourful side that last late into the night. Other than that we really liked the city, we'd recommend staying in Copacabana or Ipanema if you were to stay and despite what we heard, we felt very safe the whole way round. There is a real buzz about the city and it is undergoing huge change in preparation for hosting the worlds sporting events. Here's hoping the government remember to prioritise their people before fame.