Tubing in the Waitomo caves

There is honestly nothing quite as lovely as climbing into a cold wet wetsuit to start your day. But there's no room for complaining here, ahead lies adventure! We're going caving and canyoning and tubing all rolled into one fun packed morning with The Legendary Black Water Rafting Company.

We had opted for the Labrynth tour that would see us climbing through crevices in rocks, wading through underwater rivers and jumping off the odd waterfall or two, all in pitch darkness. Given Natalie's unease with the dark and water, I knew this was going to be a hit.

The good news for us was the previous night the North Islands drought had ended and dropped a quarter of the months rainfall in one sitting. This meant water in the caves and added adventure - the instructors were certainly excited! Now that the wetsuits are on and we're looking like shrink wrapped ham, on it's time to go caving! Before we go, just a couple of tests: 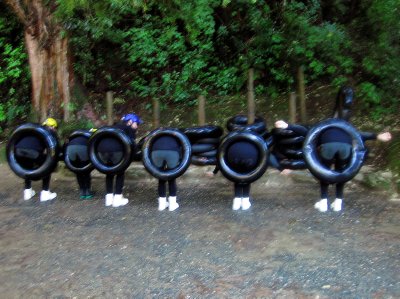 Competency test 2: Put the rubber ring over your bum and jump off a pier backwards into said rubber ring. 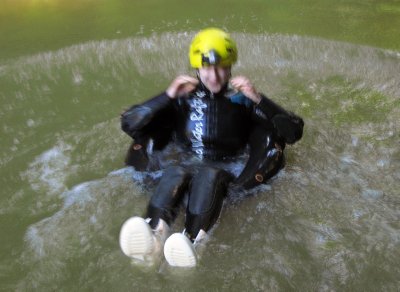 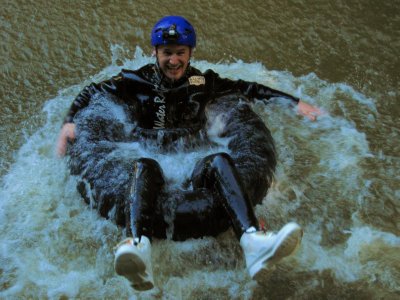 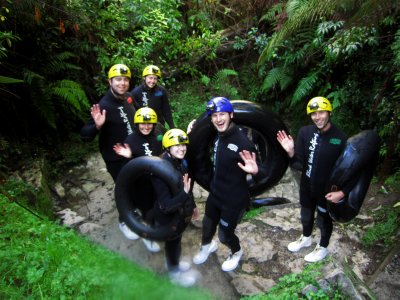 Check! And we're caving!! We entered the cave from near the top of Ruakuri cave. Meaning 'two dogs' in Maori the cave was unsurprisingly given it's name after Maori huntsman encountered two dogs near it's entrance. When the dogs attacked, they were killed and their hides given to the chief as a gift. He honoured the dogs by naming the cave after them.

Ruakuri is also where you can do a walking dry tour of the glow worms, but why do that then you can climb in through a rock face? Inside the first cave we took a seat and waited for our eyes to adjust to the darkness. Looking around (we had head torches) it was great seeing the layed rock formation, the stalagmites falling from the ceiling and the stalactites reaching up from the ground. If you want an easy way to remember, try the phrase, 'as the night comes up the tights come down'!! 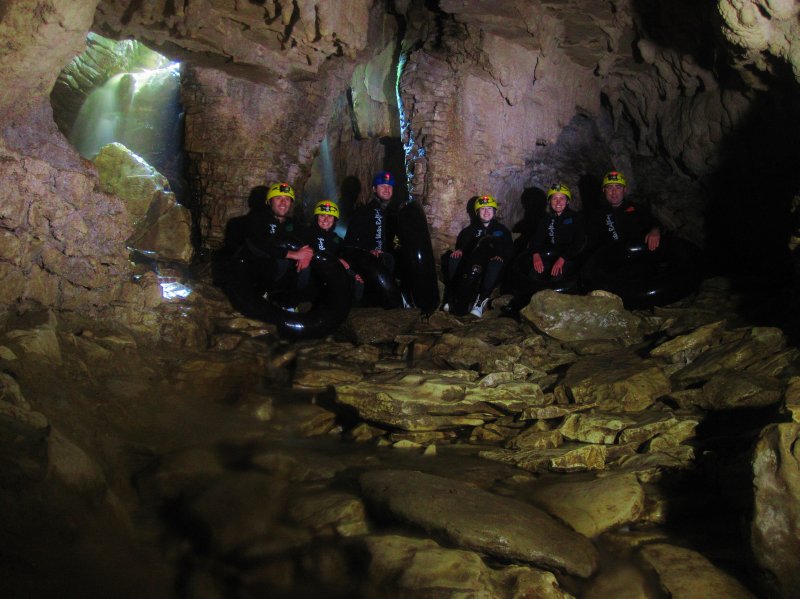 Ever a willing, if not naïve volunteer, I took the guides instructions (right, left, right, right, left then stop when you hear the thundering sound) and headed through the labrynth of tunnels the water had cut through the caves over the years. At this point we where about knee deep in water, watching we did not hit the stalagtites off the ceiling and push back their slow growth (about 1cm a year). Sure enough, a large thundering sound appeared and we came to our first stop. The instructor came to the front of the group, climbed down a couple of steps and put us into position. Turning our backs to the pitch black abyss we had to put our faith in our instructors and jump off a waterfall backwards, suddenly I regretted being such an eager volunteer.

Landing in deep water, we connected legs and pushed our way through the canyon leaning as far back as possible in our rings so as not to hit our heads on the low ceiling above. We followed the tunnel through the caves, getting out and climbing over rocks and bumping out heads all over the place before coming to our second stopping point where we were rewarded with a chocolate fish.

We then turned our lights off and looked to the tiny LED like glows on the ceiling as our instructor told us the tale of the humble glow worm:

A Life in the Day of a Glow Worm 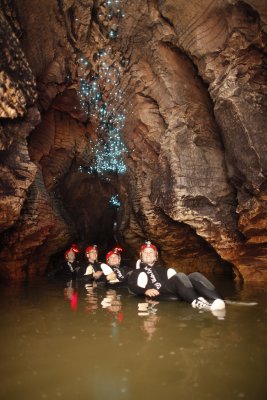 Like the killer whale not being actual whales (read the story here), glow worms are not actual worms. Glow worms are the tiny little larvae or maggots of what will become a mosquito like fly. The irony of the fly is that despite representing the maturity of the bugs life cycle, it spends more time as a glow maggot (up to 9 months) than it does as an actual fly (about 3-4 days).

Being an older sibling has a large advantage in the glow worm world.

A female fly lays around 120 eggs in a colony. As the larvae are very sensitive to cold and dry they'll lay their eggs within a crack or seepage point. This makes caves like the ones in Waitomo ideal.

Cracking out of their egg shells 6-8 weeks later these critters are cranky and boy are they hungry! They stick their retractable heads out of their shells to see what snacks might be in the area, maybe a tasty fly or a nice midge. Given the close proximity of their brothers and sisters however, it would be much easier just to eat them, and that's just what they do! About 60% of glow worms are eaten by their bigger siblings!!! And you thought birthday beats were bad!!

Assuming they haven't been devoured (accompanied by a nice chianti) by their brother, Hannibal, its time for the glow worms to go fishing. They drop a line of mucus up to 40cm beneath where they are nested. This acts in a similar way to a spiders web; they lure insects into their web with their attractive tail light. Once a bug gets caught in the web, its wriggling lets the glow worm know it's in luck. It retracts it's line, kills its prey then either sucks out the juice or eats the prey whole. Delightful.

Once the have digested their food/little sister, the proteins are broken down and excreted in the usual way. These mix with oxygen in the air and another enzyme produced by the worm and the reaction creates one of the most efficient light forms known to man. So next time you're admiring a glow worm, just think: "That's some pretty sh*t!"

After the larvae stage, their shells harden and they turn into Pupa, similar to a cocoon stage for a butterfly. A fortnight later the glow worm will emerge as beautiful fly with no mouth and only one thing on it's mind in the 4 days it may live for: making love.

The female flies are unable to fly and attract a male fly with their light, multiply males will often wait around a female pupa, waiting for her to hatch into a willing partner. The male will introduce himself, mate vigorously for up to 12 hours, roll over and die of exhaustion. And they say romance is dead!

The female lays the eggs and the whole process starts again leaving us with the age old question: which cam first the glow worm or the egg?

The glow worms were really very impressive and shone far brighter than I imagined they would. So bright and yet with the light on you would barely be able to see them if it were not for them dropping their lines.

We continued down the cave, jumped off an even larger waterfall, satin our rings, linked feet, turned off our lights and let the current (and the instuctors) carry us down the waterway whilst we gazed at the brightly glow worm lit ceiling above. The photo above really does not do justice to the light these little critters give off.

After navigating the 'kissing tunnel' (if you don't watch out a stalactite will 'kiss' you in the face) we were set the challenge of navigating ourselves out of the tunnel without using our lights. Funnily enough if you lay back and enjoy the ride, the rest of the group won't know you're not doing anything and float you to the daybreak light at the end of the tunnel!

Back to the centre for a hot shower, soup and bagel! What a great morning out! 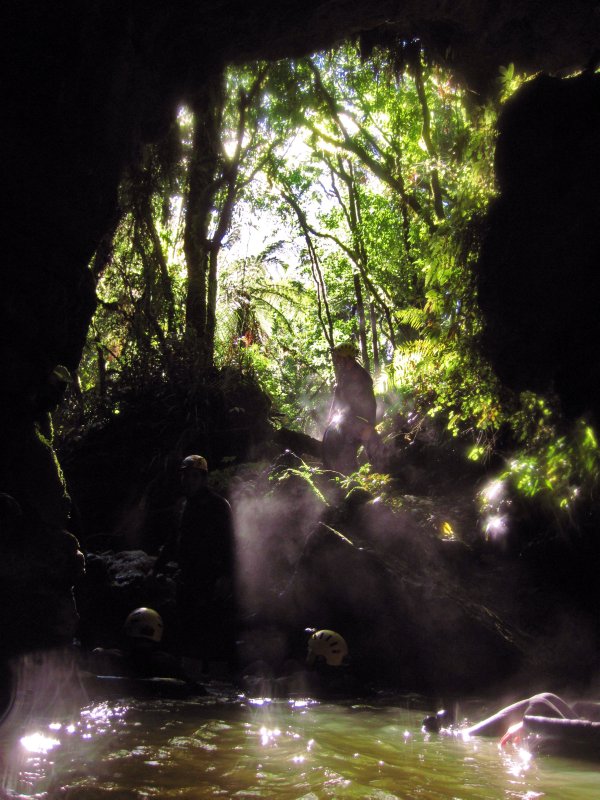 A huge thanks to Pete and Melissa who we met on the trip for sending us the pictures and an even bigger thanks to our friend Ashling who twisted our arms into going to Waitomo as we would have gone straight past otherwise! We absolutely loved it!

If you liked this, please follow us on Facebook and Twitter for more updates, or check out our best pics on flikr. Thanks and happy travels!