Taking a stab in the dark with dinner 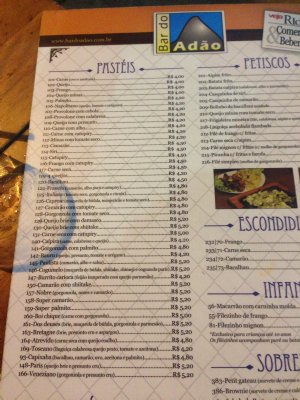 The problem with Portuguese is simple: it’s not English! I count myself very lucky to be English as our former Empire means that most places you travel in the word you can get by speaking loudly, slowly and with a few hand gestures. Our education system supports this assumption and runs ignorantly behind our multi-lingual European cousins and if all else fails we also have America on our side…… and Canada, but who counts them anyway?

It therefore always comes as a shock when you arrive in a country and everything seems, well, surprisingly foreign! We stick our arms up in the air frustratingly exclaiming to each other that they don’t speak English. How could a developed nation not speak English? It’s almost as if they come to the UK and we don’t speak their native language back to them! 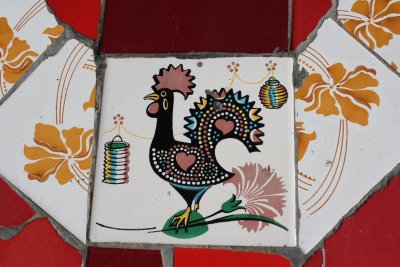 Sitting down to dinner and staring at a list of over 80 dishes written in complete gibberish, we realised eating was going to be an interesting affair. For the first time in my life I wanted to order from a menu with pictures on. Luckily I had learnt a key phrase “Rei do Frango” on our previous trip to Lisbon, which roughly translates as ‘King of the chicken’, or as we say in the UK, ’Nandos’!

Armed with this invaluable vocabulary, we were surely destined to dine like Kings….. or get scraps like chickens! We’d even seen a Nandos sign on the Escada Selaron earlier in the day. There was no way this could go wrong. After all, everyone knows ‘Nandos’ is Portuguese for chicken!

One side of the menu was headed ‘Pastille’ and had about 30 lines underneath it. This was good, we knew Brazil was big on pasties or empanadas. We pointed randomly to a couple of items from the pastille section of the menu safe in the knowledge that whatever we had ordered, it would be surrounded in pastry.

Add Natalie's allergy to fish and what you’re effectively doing is playing dinner roulette. Who knows what’s been ordered? Well, hopefully the waiter but I’m already annoyed with him for not reading every line of the menu to me. Rude! 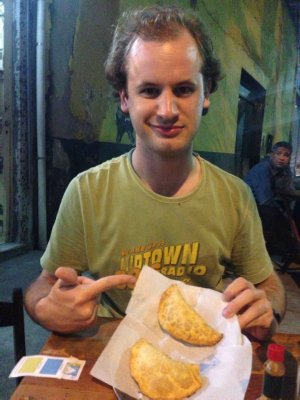 We even chose one dish because it had the word ‘super’ in, that had to be at least ‘good’ if not super, though food labelling has misled me before, a big mac is neither big, nor is it a raincoat and Kentucky fried chicken comes from Brixton not from Kentucky as advertised.
Natalie ordered a dish based on the word frango and we ordered a beer or ‘cerveja’ and gin and tonic, ‘gin e tonica’. Our first pastilles arrived and they were very tasty, some meat, ‘carne’, some cheese, ‘quija’ and some super. The waiter came to clear the plate, took out his order booklet and waited. Not to be rude, I pointed randomly at two other menu lines which he wrote down and disappeared into the kitchen.

It’s clear that Rio lives outdoors on the street, very few restaurants have large amounts of indoor seating, the majority of seating it out on the pavements where you can enjoy your plates of carbs, cheese and meat and watch the world go by.

From where we were we could watch as the night came in and the seedier side of the city took over. Ladies standing on the corners waiting for a customer, greeting each other quite bizarrely with high-fives, all in clear view of the policemen who have quite a clear presence in Rio.

Whilst we sat listening to the acoustic singer in the bar across the street, a police car pulled up and the police ordered a couple of pastilles and chatted to the restaurant owner. A car pulled up behind, went in, got a beer in an open top plastic cup, walked back past the police, stuck the beer in his cup holder and drove off. I guess that’s the zero tolerance to drink driving that lonely planet described to us!

The remainder of our meals have been a similar confusion, attempting Portuguese, having the English speaking waiter sent over and repeating words back and forth until they tire and bring you the most popular thing on the menu. The food has been good, obviously they like their beef here, and we’ve enjoyed a feijoada (a pork and black bean stew served with rice and 'forofa' - basically sweet misery sand) or two. 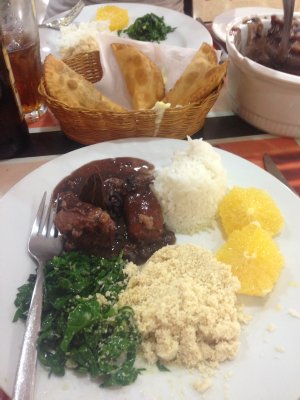 I particularly didn't enjoy this breakfast dish of banana and cheese sandwich served at Bob's burgers! Why do I always have to order something if it sounds a bit odd? 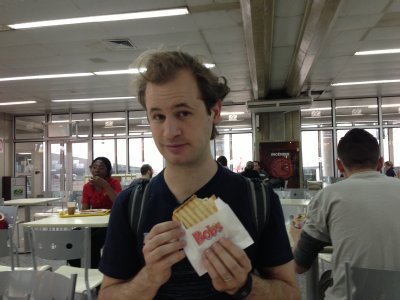 I’m sure there are some better dishes on the menu. We just don’t know how to order them!!!

I have a dream that my four little biscuits will one day live in a nation where they will not be judged by the colour of their crust but by their character.

Whilst we are on the subject of food, I want to use this platform to raise a crucial issue in the confectionary world.

It is time to put an end to biscuit racism.
The Garibaldi's have been ruling their path of oppression for too long.
Say NO to the superiority of the Custard Crème.
Say NO to discrimination from the so called 'Nice' biscuits
Let us look to our multi-racial Oreo leader and say Yes, with heart and voice.
Let us end Biscuit Racism today
Black Power. 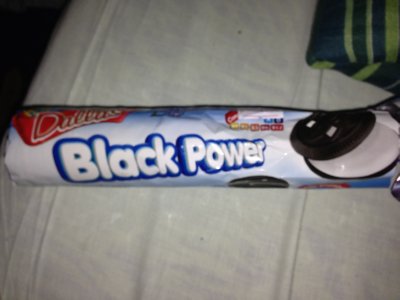