Natalie writes on the Iguassu falls 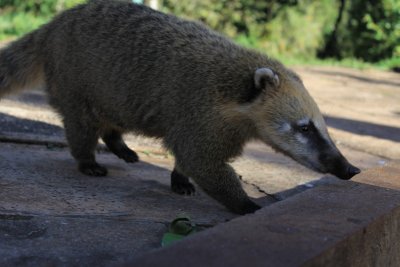 After the excitement of Rio, it was time to move on and see the stunning Iguazu Falls, a set of waterfalls that border Brazil, Argentina and Paraguay. When we told friends and family we were visiting South America, those who had been previously insisted on us making the trip to Iguassu as it is one of the best natural wonders to see on the continent. Lonely planet lists it in one of the top 10 waterfalls in the world.

Not being overly sad to be leaving Rio and its riots behind, we packed our bags and took a taxi to the airport. Some confusion set in as it became apparent that 3 flights were leaving our gate within 30 minutes of each other, all of which were either 'boarding' or 'final call', and all through the same walkway. Strange given the other 30 empty gates in the terminal. We weren't completely sure we were heading to Foz do Iguazu until we asked the stewardess on the plane!

We arrived in Foz do Iguazu to a cooler temperature than we had left, but to a lovely small town with clean streets and friendly people. It was a nice change after the hustle and bustle of Rio! Not to lose time, we checked in to our hotel and took the bus straight over to the Brazilian side of the falls. You take a tour bus from the visitor centre out to the falls where you can do trekking, wildlife spotting, repelling, and pretty much any other activity you can name as well as seeing the falls.

The falls is also home to Coati (pronounced co-art-ee), an animal we never even knew existed and seemingly lives on lunches toursits leave behind!

Legend has it that a jealous forest god, enraged when a young warrior escaped downriver with a young girl, caused the riverbed to collapse, producing the falls over which the young girl fell, and was turned into a rock. The warrior survived as a tree overlooking the rock. Whatever caused these mighty falls, you have to see them to believe their size and grandeur:

From the Brazilian side, you get a magnificent vista of the falls from every direction; they are endless spanning over 3.5km with an estimated 275 individual waterfall cascaded all crashing into the Rio Iguazu. Looking at other travellers photos of the falls, it does seem we were there at peak flow of the river, the individual cascades in other photos are clearly defined and separated by plush greenery. We had about 5 separate cascades flowing at a rate that had shut half the viewpoints due to safety, sadly including the Devil's throat lookout where you can stand over the falls. Still they make for some spectacular pictures:

I even had a date with a sideways rainbow: 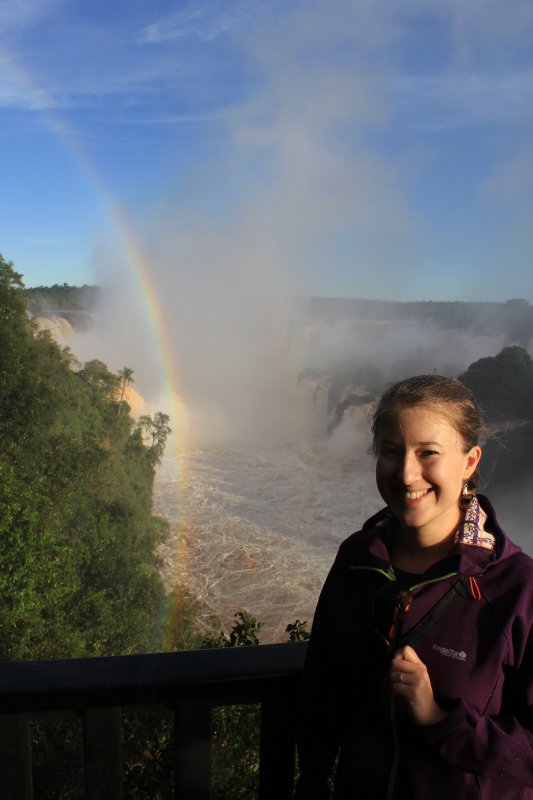 Following the trail round we reach the Garganta del Diablo, or Devil's Throat, a semicircular falls that are a sight to behold. Also good for getting very wet!! 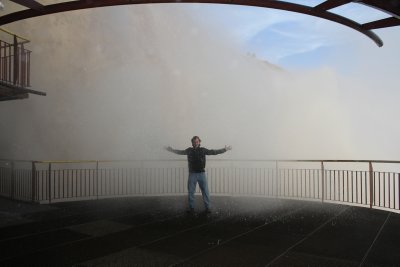 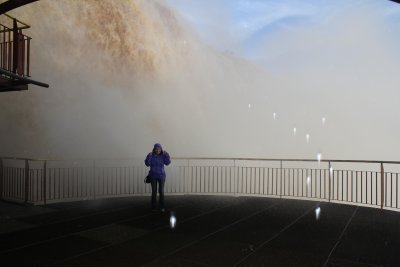 Churrascaria - Brazilian for lots of meat!

Leaving the falls after sunset, we were aching to try the Brazilian way of eating, Churrascaria. Countless meats are cooked on rotisserie spits and brought to your table where the waiter will cut a piece of meat off to your liking. On your table will be a picture of a cow with the different cuts labelled, your participation in this is very simple, a 'Ci' or a 'Non'. Also on the menu is spicy sausages, chicken breast wrapped in prosciutto and chicken hearts (one for Will, not me!!)

Our hotel recommended one and we enjoyed a free pick up across town and settled down to a lot of meat and as much of it as we could eat. Thanks Womble for the anniversary present! 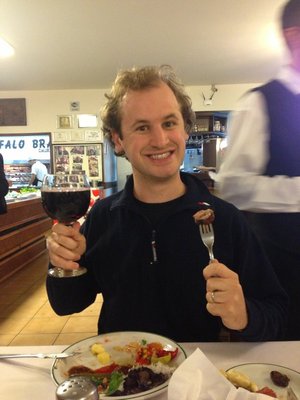 The food was good at best but you go for the experience of trying a bit of everything until your waistband protests. I may be a former vegetarian, but this has nothing to do with the fact that of the entire buffet and selection of meats, my favourite by a long way was the cinnamon-crusted roasted pineapple. Don't tell anyone, but my husband agrees! 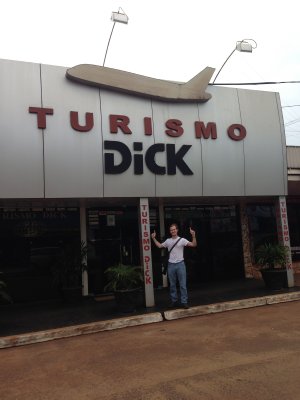 The following day, we returned to the falls, this time on the Argentinian side, going over to Puerto Igazzu, the local town. Fun as it was going into Argentina for the day (got the stamps in our passports and everything!), it was frustrating for a number for reasons: (1) you need to get some pesos for the day as they won't accept reals, (2) none of the local shops would break a note, and (3) at the falls themselves they only take cash and not card! As we had only took out enough cash for bus tickets and souvenirs, this meant I bought a ticket with the cash we had, then ran into the park to the cashpoint at the gift shop to get some more! 3 attempts later and we had our cash! Don't ask me why there was a cash point inside the park and not by the gate, clearly no logic at work here!

The falls themselves this side were up close and just as impressive, although sadly the Devil's Throat and the little island you can take a boat out to were closed due to the volume of rain. Still some great views of the falls: 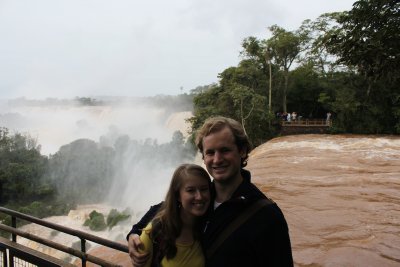 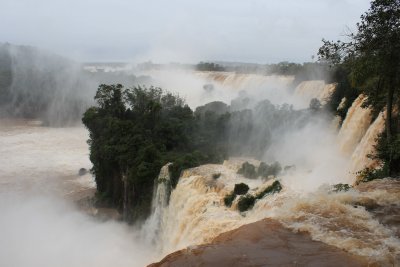 Overall I think I favoured the Brazilian side of the falls as the expanse of the falls can only truly be seen from here, by contrast the Argentinian side does offer a far closer look and you get a real feel for the power of the falls roaring beside you, A brilliant part of our trip so far!

Will also got to 'stick it to the Argies' (his words not mine). I don't think they were to bothered! 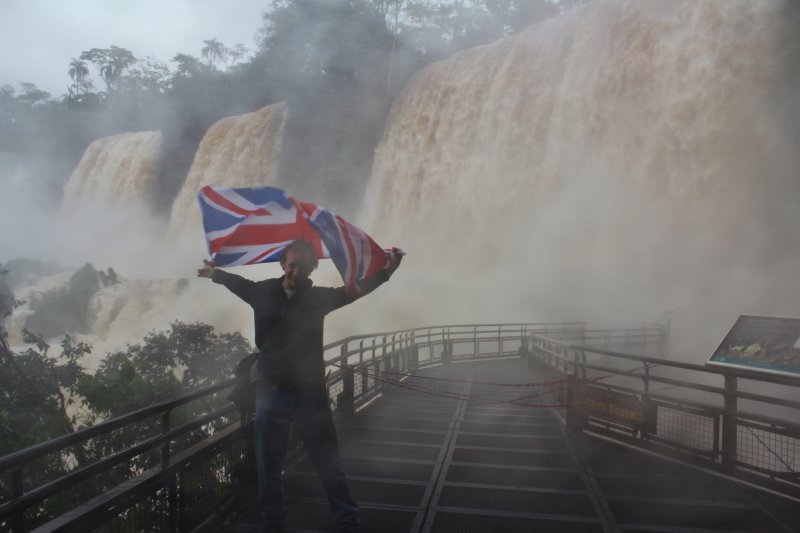