Ladies and Gentlemen, please be upstanding for the national anthem of Australia

Apparently we have not landed in Australia as ticketed on our flight stubs but a place known simply as “Staylia”, a land where the national uniform is spandex/sportswear. First surprise being people do genuinely say g’day here, a big tick in the stereotypes box though we are yet to see anyone riding a kangaroo to work wearing a corked hat. 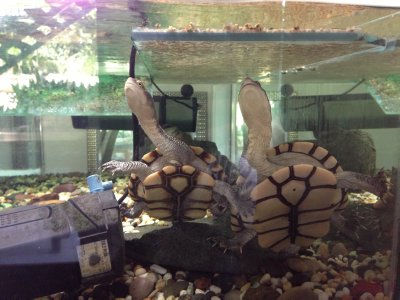 Stayed the first couple of days with my parents in a house sit where they are looking after two cats so large that you could not see Natalie stood behind one, and a pair of long necked turtles. For a country who has a whole city named after Charles Darwin, I have no idea how these ugly creatures won the fight for natural selection. Animals not only ugly but so dumb if you stick your finger on the side of the tank they’ll repetitively smash their heads into the glass side trying to eat your digit…. Pretty entertaining though.

Natalie has been introduced to the local delicacy of Tim Tams (much like a penguin bar but with the addictive quality of crack cocaine). Also took the parentals to their first sushi conveyor belt restaurant which quickly descended into a more primitive ‘hunt your own dinner’ as mum saw something on the conveyor belt, looked at it in the menu, got a translation of what it was, decided she liked it and proceeded to chase it down the restaurant. Still, who doesn’t like a dinner and a show?

Now on our private jet to Sydney, I say private jet, it’s a Boeing 737 but when there are only 31 passengers on board including the pilot and the three trolley dollies, that’s probably the closest we’re going to get!