New Zealand and the Cook Strait Throughout New Zealand, I really enjoyed hearing the Maori legends that form the basis of their understanding of the geography of the land, their beliefs culture and a fair chunk of New Zealand's history. Here is an exert from Te Ara, an excellent website produced with the support of the New Zealand Ministry for Culture and Heritage compiling an Encyclopaedia for everything New Zealand.

The North and South islands of New Zealand are known respectively as the fish and canoe of the legendary hero Māui.

Māui fishes up the North Island

One of the greatest stories of Māori literature recounts the fishing up of the North Island. It begins with Māui and his brothers setting off on a fishing expedition. The elder brothers did not want to take Māui, so he hid in the canoe and did not reveal himself until they were out at sea. When he emerged he managed to convince his brothers to row out to the deepest part of the ocean, where he cast a fish hook made from his grandmother’s jawbone. It sank below the waves and fastened to the underwater house of Tonganui, the grandson of Tangaroa, god of the sea. Māui hauled up his catch above the water. The land, the North Island, became known as Te Ika-a-Māui (the fish of Māui).

How the North Island got its shape

Te Rangihaeata of the Ngāti Toarangatira tribe dictated this version of how the North Island got its shape after it was pulled from the sea:

Māui left his brothers and returned home. He said to his older brothers, ‘After I leave, please do not partake of the fish ... Do not cut up our fish …’ However, [after he left] they did not do what he said. They began to cut it up and eat it … When he returned Māui became enraged … He was greatly distressed as they cut the head, the tail, the gills and the fins … This is why this land lies unevenly – there are mountains, plains, valleys and cliffs. If they had not fought over the fish, then the land would have retained its fish shape.

In some traditions the fish is said to be a pātiki (flounder); in others it is a whai (stingray). The head of the fish lies at the south of the North Island, at present-day Wellington, and its tail is the Northland region. The barb at the base of the tail is the Coromandel Peninsula. The pākau (fins) are Taranaki and the East Coast, and the backbone runs between Taupō and Rotorua. The heart is at Maungapōhatu, in the Urewera district.

It is often said that the North Island is Māui’s fish and the South Island his canoe, but the East Coast tribe, Ngāti Porou, believe the canoe ended up somewhere else. They say that the first part of the fish to emerge from the water was their sacred mountain, Hikurangi. Māui’s canoe, Nukutaimemeha, became stranded on it, and is still there in petrified form.

The stern of Māui’s canoe is the southern tip of the South Island, and the prow is the north. When Māui hauled up his great catch he stood on the Kaikōura Peninsula, which is called Te Taumanu-o-te-waka (the thwart or seat of the canoe). Stewart Island is believed to be the anchor.

The journey between the South and North Islands of New Zealand takes you through the stunning Marlborough sounds across the Cook Strait and into Wellington. Dolphins swim up and play between the ferry's two catamaran hulls and the water is so clear you can see the rich ecosystem of fish the sound homes gleefully enjoying their beautiful habitat. The sunrises over the sound and bounces off the clear blue water illuminating the plush green forests on the banks of the sound. I was really looking forward to this journey. So beautiful, I insisted we stayed an extra night in South Island (there was, after all, free apple pie at the hostel!) to take the day time crossing, and enjoy the views: 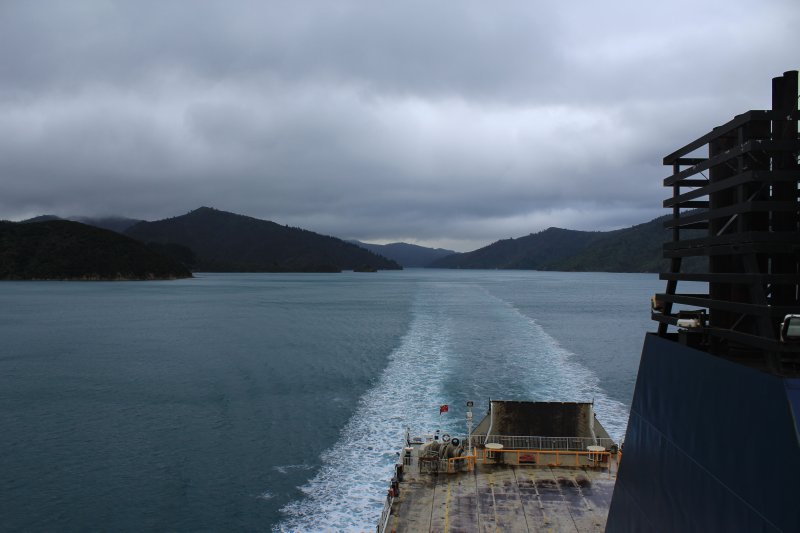 Not quite what we had in mind!

Named after Captain James Cook, the first European to successfully navigate the water in 1770 and largely accredited for the discovery of Australia and New Zealand, though they had been visited by the Dutch explorer Abel Tasman some 100 years earlier, the Cook Strait is considered one of the most dangerous and unpredictable waterways in the world. And didn't she live up to her name!

Natalie has always suffered from sea sickness, her and boats just never agreed. Whilst on the whale watching trip in Kaikoura, we were told that seasickness was mainly mental, you just needed to focus on the horizon and not think about it. Ginger may help, most of the seasickness tablets are placebos, just get on with it. I reminded her of this and left her to lie down across some seats as I went to explore the boat. I after all, am an experienced sailor and explorer, just like Captain Cook himself!

As we left the calms of the Marlborough sounds the boat decided to take a bit of a different journey to the ticketed 'Scenic Cruise' as six foot waves rolled the boat back and forth. The waves smashed into the hull of the boat, the splash of the waves so large they ricocheted off the hull flying into the sky and covering the the seventh floor windows of the boat. I started to wonder if I put the hand brake on the car.

Checking on Natalie, I strolled smugly down the centre of the boat like the old sea salt I am, and continued to the front to take the below picture and inhale the sea air. Shame the exhale wasn't quite as smooth! Now I know why they are called 'Emergency' sick bags!

This was not a scenic cruise, this was Homers Odyssey, soon to be Poseidon! At least the Titanic had a calm voyage before it hit the iceberg!

Emerging green faced from the heads, I found Natalie asleep across the seats! Typical! Bring on the dry land of Wellington! 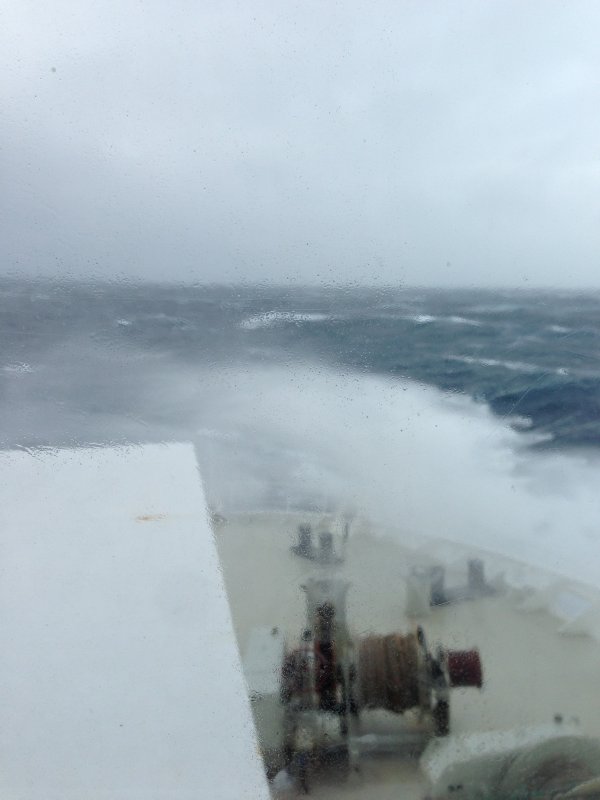 Oi - thats my favourite niece you left up-chucking! Return to her immediately as I remember clearly being somewhere in a large room and hearing some talk of in SICKNESS and in health.There was a big white dress and confetti ....

Exactly-I was being ill and where was my wife? Sleeping! Pfft!

It looked so pretty at the start