How the sperm whale got its name and other stories

When it comes to naming whales, a fairly easy precedent has been set. Blue whales are blue, hump back whales have hump backs, right whales were 'the right whales to hunt' and killer whales... Well they're not actually whales, they're part of the dolphin family but still they 'kill whales' and hence the name.

The story for sperm whales is not as straight forward. Discovered by whalers on a hunt for right whales, they killed the sperm whale and dragged it into shore. Cracking into the front of the whale's head they found 2.5 tonnes of a white, sticky liquid and assumed they'd found the whale's reproductive organ. Why they thought it was at the front of its head I don't think we'll ever know but it was named a sperm whale. Later they caught females and found the same substance at the front of their heads too. By then it was too late the name had stuck.

Unfortunately for the sperm whale they found this liquid very useful as a lubricant, to put in creams, perfumes, oils, candles and Rolls Royce even used it in their gear boxes.

It was later discovered that sperm whales use the liquid to help them dive. When they need to dive they cool the liquid, it gains density and helps them down to depths of 3,000m. Despite having the same lung capacity as a cow, sperm whales store oxygen in their muscles and can stay under water for over 2 hours, though the average dive is 30-60 minutes. An average 16m (though one has been found over 18m) in length these 45 tonne beasts are the largest toothed animal in the world and the third largest species of whale. They have been found with whole Mako sharks or even great whites in their stomachs having swallowed them in one! They can kill their prey by emitting sound up to 230 decibels, the largest sound made by any animal, 180 is enough to cook a humans organs alive!! Now you know, bring your earplugs and let's go find one!

Kaikoura is one of the few places in the world where snow capped mountains meet the ocean. Famous for its whale watching and the extensive local ecosystem, it is honestly one of the most beautiful places I have ever seen. It was my favourite place in NZ last time I visited and I think it may be again this time.

We headed out on the early boat from the whale way station (genius, I know) with Whale Watch Kaikoura and we were in luck, the scout boat had seen a sperm whale dive earlier.

Natalie was loaded with sea sickness pills and we sat nearer the back where the boat is more stable. On the way out to the deep sea ridge we were told about the whales, how to spot them and how long we'd expect to see them for. I enjoyed the talk as looked at seals and albatrosses out the window enjoying my time though the water was a 'little choppy'. When I turned back Natalie was braced in the seat as if she were holding the boat together, the metal arm rests indented with her hand grips. Maybe it was a little rougher than I thought!

We stopped to watch some albatross skim the water, half flying half running, for their breakfast; with wingspans up to 3m, these are the largest sea birds in the world, and they are big boys! Stopping also gave the crew an opportunity to drop the sonic sounds meter to look for whales. We were informed it was a waiting game and reminded the average whale watch may see one whale but nothing was guaranteed.

A couple more stops and the first spout of water was seen off the starboard side and the boat raced over to see the whale. They normally surface for 5 or 6 minutes to re-oxygenate before diving so time was of the essence as we didn't know how long it had already been up. When we pulled aside, it was clear this animal was much larger than our boat. 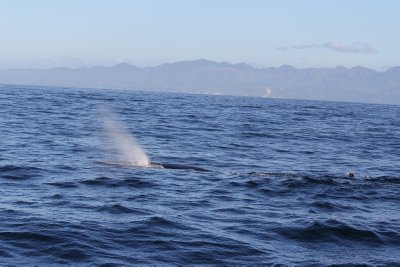 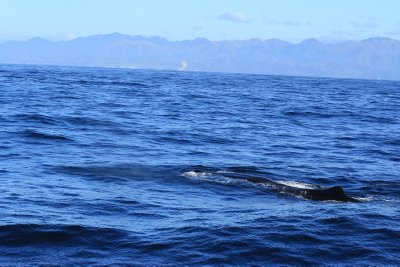 From the boat we could see the top of its head and back before it dove again giving the infamous tail shot. 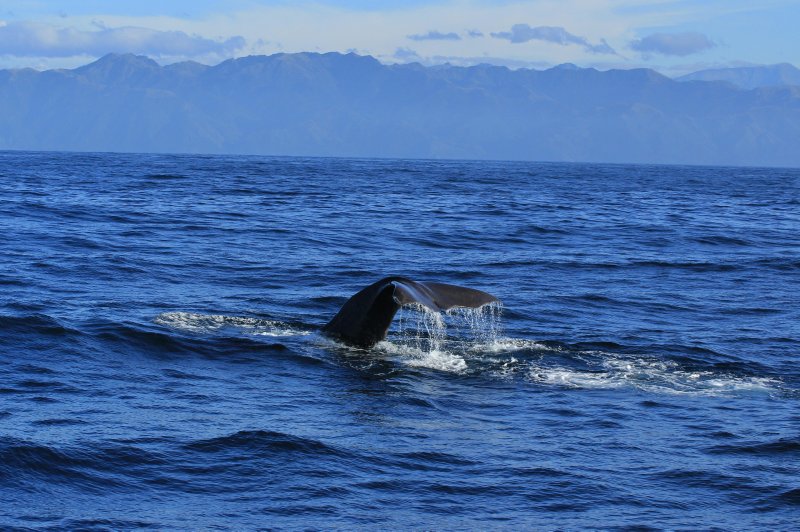 The crew informed us it was unlikely we'd see another whale so we headed inshore to see what else we could find. It wasn't long before we found a pod of around 200 dusky dolphins who rode alongside and in between the hulls of the catamaran. 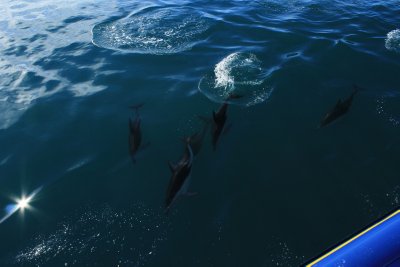 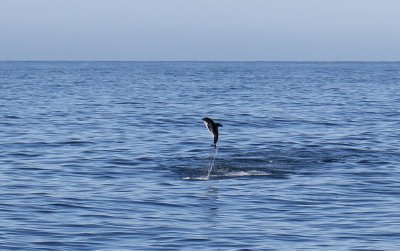 We were even treated to some acrobatic displays as they jumped and flipped out of the water. Although I am prone to the odd exaggeration, they were quite literally everywhere you looked. For me seeing the dolphins like this trumped the whales as they're so playful and plentiful, brings a real smile to your face. 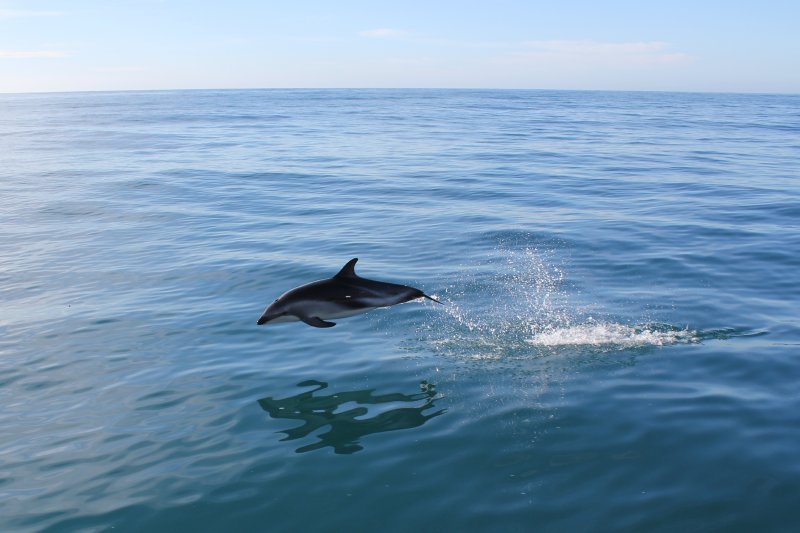 Kai Koura comes from the Maori 'Kai', to eat and 'Koura' means crayfish, New Zealand's Rock Lobster. With a name like that, it'd be wrong not to eat some! And you can get them pretty fresh: 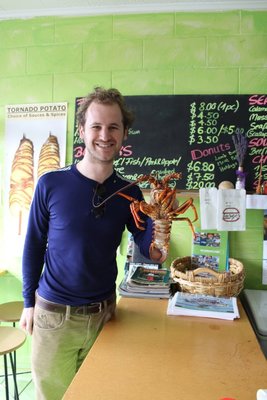 It's always nice to meet your lunch!

When getting dinner last night in Coopers Catch 'fush and chups', we met a Brit who'd retired out to Kaikoura. We exchanged the usual pleasantries, said we'd seen the seals earlier that day etc etc. On parting he gave us a great tip to stop at Ohau point, a waterfall where mothers take their seal pups whilst they fish. Little did we expect what we found. Must have been 50-60 seal pups (apparently up to 200 in the height of winter) splashing around and playing in the waterfall. Very cute - gets my seal of approval! Ah ah ah *clap hand like seal* 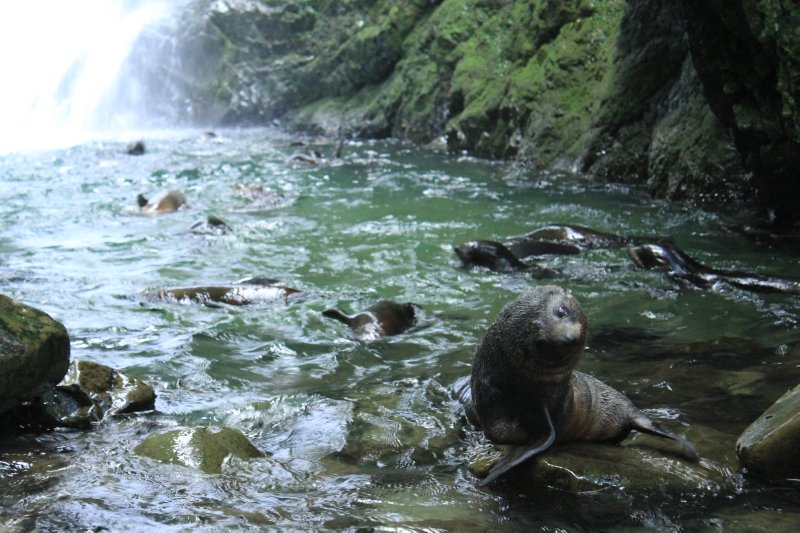 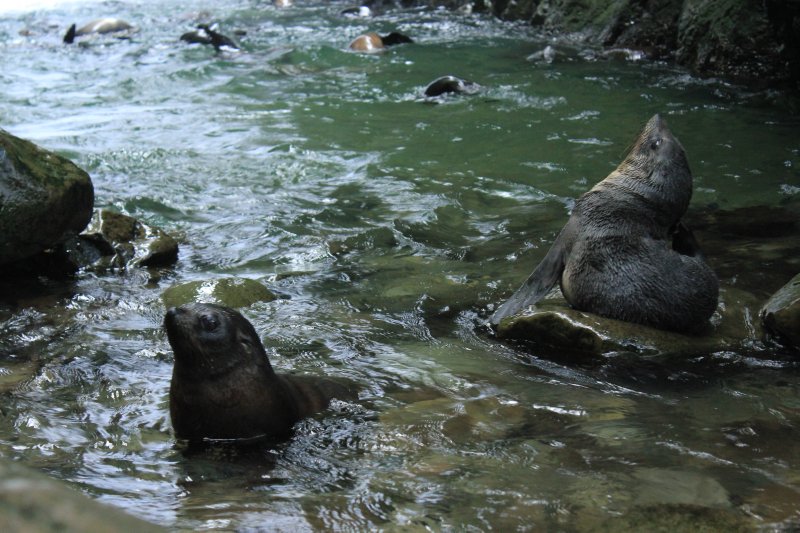