New Zealand is often referred to as 'the land of the long white cloud'. Never is that truer than in Milford Sound, where the clouds sit so low you can virtually touch them..... Well it's very foggy and raining!

A 5 hour drive from Queenstown with nothing but a pie shop in Te Anau in between, this cloud factory will often see around 250mm of rain in a single day. With 200 rain days a year, you're pretty destined to get wet. Despite the weather the place is simply stunning and well worth the journey to what Rudyard Kipling once described as the "eighth wonder of the world" and it's tourism trade has been dining off it ever since.

Mum and Dad decided to join us for the trip and endure their first stay in a backpackers. There was, after all, little choice, there are only two accommodation places in the sound. Inspired by the promise of shared bathroom facilities and a kitchen with pans cleaned using only a running tap and someone's hand, Mum couldn't wait to get settled in. With a full suitcase packed for one overnight stay, including slippers, pillow slips from the Ritz Carlton (we convinced her not to bring the whole pillow) and a bottle of Gin, it was clear she was preparing for a mud shack.

The drive to Milford Sound is worth it in itself, from Wanaka through the Crown Range to Queenstown followed by the lake roads through the valleys to Te Anau and finally the ascent into the mountains past and the 1.2km Homer tunnel popping us out into the sound. And thats not including the numberless viewpoints along the way each offering its own desktop background photo opportunity.

Now when there are mountains there'll be winding roads down and through the valley. luckily for us Mum once met the late Colin McCrae and showed off her rally skills as we descended into the sound.

A pleasant surprise greeted us 50km in 3 mins later, as we fell out of the car green faced and clinging to the floor for stability. The hostel is large and immaculately clean with a huge lounge and cooking area. Mum put away her Hilton advantage card and smiled. We were given the keys to our one room freestanding porter cabins with balcony doors onto a view of the mountains. Though bizarre, the rooms were really comfortable and provided a sound nights sleep irrespective of the rain on the tin roofs.

We decided to take a quick jaunt into town to see what Milford Sound had to offer. 1 minute 14 seconds later we were done. Milford Sound consists of four things; the lodge, the airport for scenic flights (with views seemingly of nothing but cloud), the harbour and the Blue Duck Pub....it would have been rude not to pop in for a handle or two!!! With an estimated 500,000 to one million visitors per year it's quite amazing that this world famous site is sustained by two lodges a pub and a ferry port but it all comes down to why you go there and that is the sound itself. 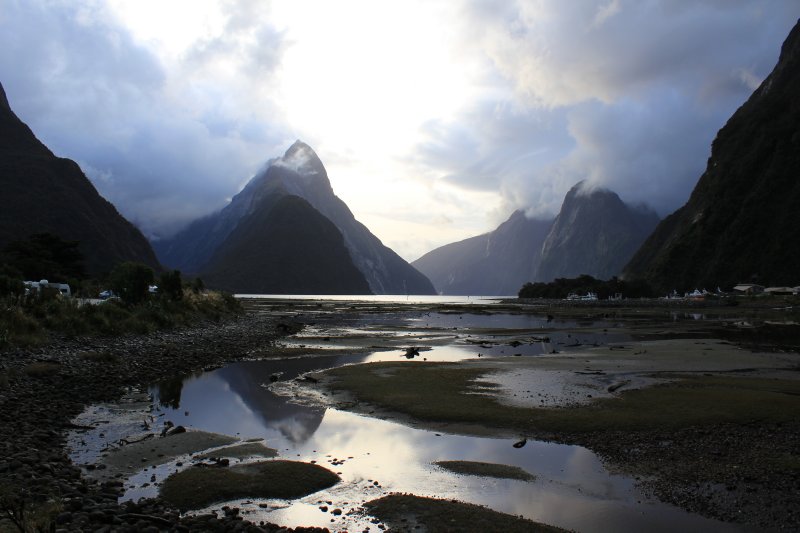 As you pop out of the Homer tunnel you are met by a view down the valley of low level cloud Forrest and onto the fiord land itself. The valley is flanked by near vertical granite rock faces that are only broken up by the countless waterfalls that cascade down from their snow covered peaks that hidden by the rising clouds. A photographers dream, of only it weren't for the fear of your camera drowning in the deluge rain! 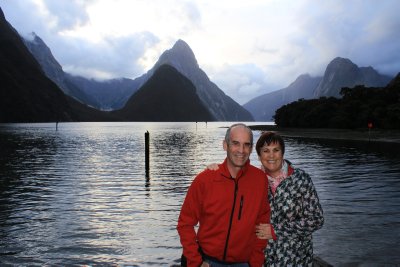 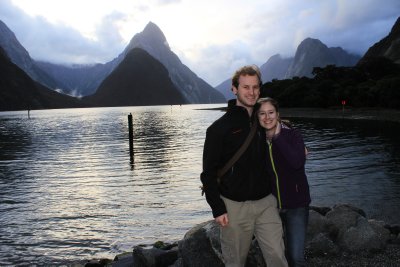 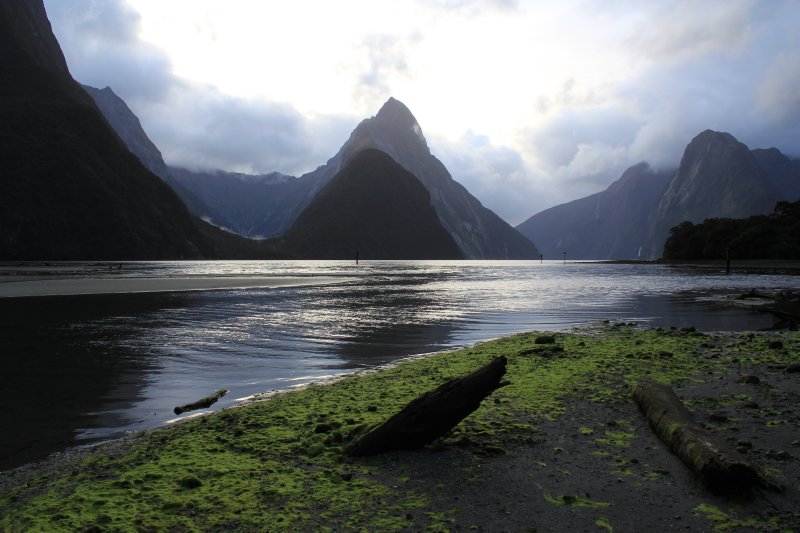 We took the 9am scenic ferry out of the harbour with Real Journeys. To say the scenery is dramatic would be a severe understatement. The nights rain had caused endless breaks in the rock face to pour out water. Unlike other mountains which may feed water into one large waterfall, Milford Sound has continuous lines of small waterfalls creating the effect of a rock face not unlike a barcode between the black granite and the white water.

A set of four larger waterfalls form the 'four sisters' which the captain described as 'casual waterfalls' as had there not been over night rain, there would be no waterfalls. The wind flies down the sound and whips the water up creating the illusion of the waterfalls almost hitting a u bend and heading back towards the sky. 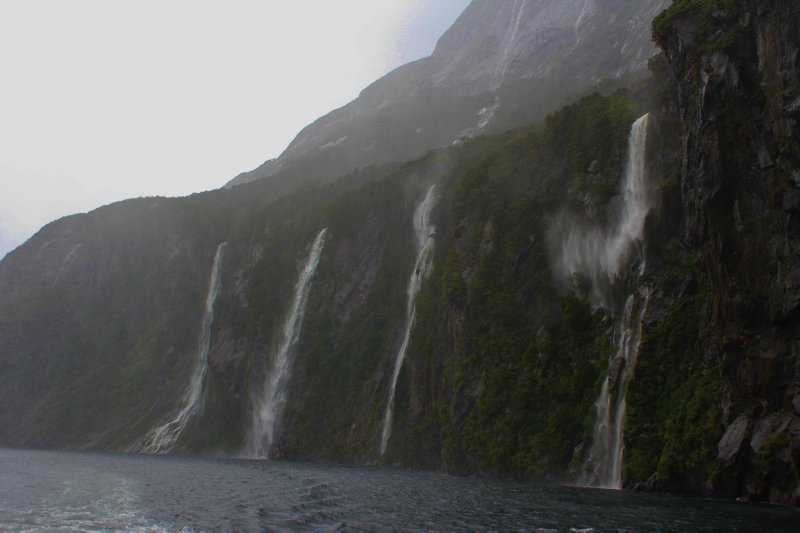 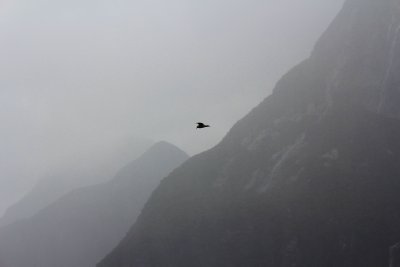 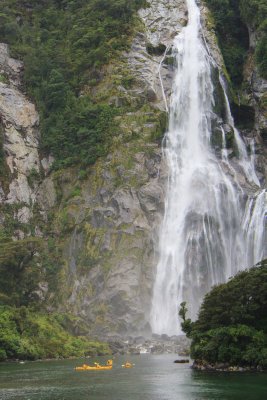 Down and out onto the Tasman sea before returning via a small seal colony but unfortunately no sign of dolphins (dolphins don't like rain!) or penguins that can normally be spotted in the sound. There is an option to do a nature cruise of the sound to see the penguins and seals up close. Eavesdropping on the captain discovered that in the 10 years he'd been driving scenic cruises, he'd never seen a penguin. Not one. Not even a chocolate one wrapped in a humorous joke telling wrapper!

Still many a Kodak moment and breathless scenery even in the pouring rain. Only seven more world wonders to go! Now just to drive the 5 hours back! Sit tight!