Ascending a bridge in a hurricane and a trip to the Opera!

Having travelled over 7,000 miles to escape the British weather, Sydney decided to show us the best of its patriarchal rulers wind, rain and hail on the day we decided to climb its' harbour bridge. It rained so hard the drain at the bottom of the road had a water fountain a foot high from the water flooding its system. Luckily I opted to wear my walking boots for the climb, unluckily Natalie had not. A short piggy back through the flood planes of Circular Quay later and we were on our way.

After being fitted with boiler suits, thermals, waterproofs, hats, gloves and radios (all of which clipped onto the boiler suit so they didn't blow off!) we began our ascent of the Harbour Bridge. Not that we climbed the bridge alone, we had a guide and a group with us including double Olympic GB rowing champion Tom James MBE!! For somebody who doesn't normally get tongue tied, Natalie watched and laughed as I stumbled over my words. He was seemingly excited about meeting me too, and so he should have been, I am after all a "dedicated athlete".

The bridge was built in 1923 and took 9 years to complete taking 6 million rivets, 52,800 tonnes of steel and 16 lives along the way. The bridge was built by a firm from Middlesborough employing Australian locals only and showing off the best in British engineering is the widest single span bridge in the world. When people think of Sydney they think of the Opera House but I have to say the bridge gives the Opera House a run for its money, it is absolutely gi-normous, more than just a launch pad for the New Years Eve fireworks! Australian legend, Paul Hogan a.k.a Crocodile Dundee himself even worked as a rigger on the bridge before finding his "fame and fortune"!

As me, my new best mate, double Olympic gold medalist Tom James MBE and the rest of the group climbed the bridge the wind set in, then the rain, then the hail. There were points on the climb when we just held onto the railings as the wind howled past. Though I am prone to the odd exaggeration, checking the weather report later in the day showed average winds of 44km/h and gusts of 63km/h! I think the picture says it all! 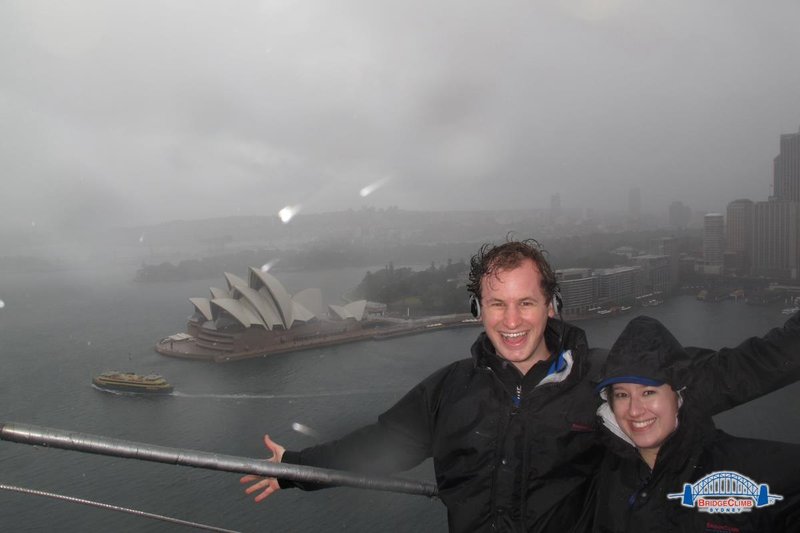 After descending through the bridge past the road and railways that crosses over we were told the interesting and amusing story of how the bridge was opened. for ease, I'll let the Australian Government tell the story.

The Bridge has an interesting past including its official opening on 19 March 1932. Before the NSW Premier, the Honourable John 'Jack' T. Lang, could cut the ribbon to signify the opening of the Harbour Bridge, Captain Francis De Groot of the political group The New Guard slashed the ribbon with his sword. Captain De Groot believed that the only person to open the Bridge should be a member of the Royal Family. Captain De Groot was detained, the ribbon tied together, and the Premier then officially cut the ribbon.

A huge thank you to those who contributed towards our climb, Natalie, double Olympic champion Tom James MBE and I had an absolute blast despite the hurricane and it certainly made a great memory of our first anniversary. 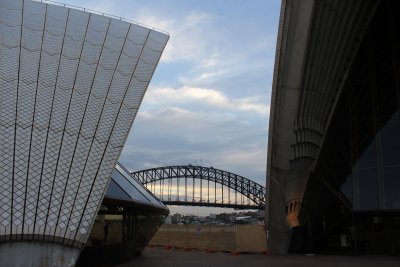 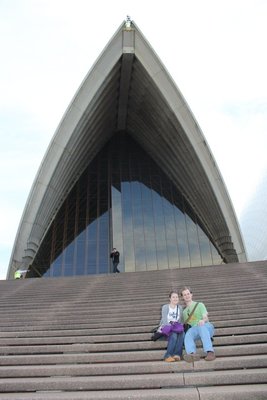 It wouldn't be a trip to Sydney without a visit to the Opera House and Saturday night had a showing in the concert hall of Cirque de la Symphony, a duet of Cirque de Soliel performers with the Sydney Symphony Orchestra. Having not seen a Cirque performance before, I quickly learnt how squeamish I am watching high wire acrobatics. Although I did thoroughly enjoy the show my main enjoyment did come from the relief of not watching someone plunge to their death on top of the woodwind section.... Probably would have sounded pleasant though! 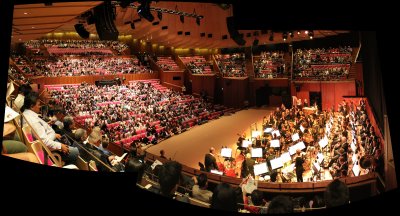 Sydney by night also provided an opportunity open up the camera shutter again, I think I did ok on this one!: